If you don’t like a lot of people to have the same car as yours, you would probably go for a Classic car or look for a rare breed. But if you want to become the only one to have the car. There’s always a custom car maker to help you. It is almost impossible to find one in Malaysia, but in the America, custom car is  easy to find as they really like to build replica of oldschool muscle car. One of the custom car make in Florida named ‘The Car Maker‘ which is owned by Mike Vetter had built one of a kind car. Instead of rebuilding an old legend, his car is based from space. Yup, he had built an UFO kind of vehicle and name it Extra-Terrestrial Vehicle or EVT. As futuristic as it seems, the EVT hides a Chevrolet Aveo under its hard silver shell. Mike, who also works on Carrera GT replica bodies for the Porsche Boxster, claims on his website that buyers can opt either for an Aveo or a Boxster donor car. Somehow though, we find it hard to believe that anyone would give up a Porsche, no matter how many thousands of time they’ve seen Captain Kirk and Spock fighting off intruders from other planets. 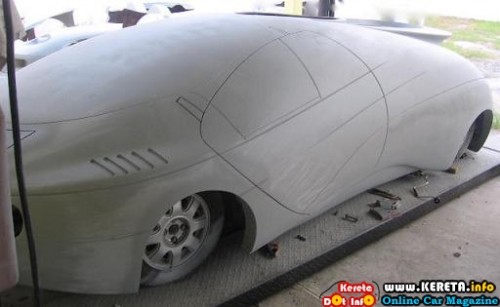 If you still want to have this one of kind car but money is an object to you, just get the Chevrolet Aveo. . Anyway, the EVT had been posted in the Ebay for a ‘Buy it Now’ price of just… $86,000. But sadly, we could’nt find the link anymore.