Tag Heur Decals At The Hood

What can be better when one of the finest watchmaker in the world collaborate with one of the pioneer of full electric sports car.It does happen at the Geneva Motor Show when Tag Heuer team up with Tesla to build the limited editon Tag Heuer Tesla Roadster.The collaboration was a celebration of the swiss maker 150th anniversary.

Red and Green Side Mirrors

Center Console Featuring Tag Heuer Concept Watch, Limited Edition Stopwatch and Meridiist Phone
The first thing anyone would notice is the prominent green and red ascent around the car which is actually the official colour of the Tag heur.One side of the car has a red coloured calipers, mirrors and matching wheel rings while on the other side, it is coloured in green.Apart from the green and red theme,the roadster features a custom graphic giving it the grey colur a two tone theme. 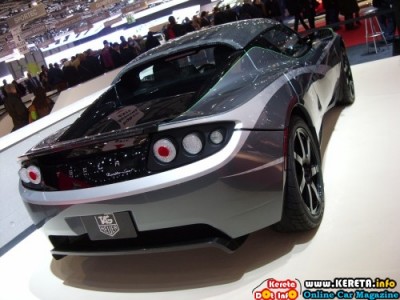 Futuristic Looking Tail Light With Two Tone Body Colour
The exterior design is said to reflect an innovative spirit of both companies with an exterior in Foucault Field Gray and a design inspired by Pendulum Art.
The Tag Heur goodness doesnt end outside. The designer had built a special center console housing a Tag Heur Concept watch and a one-fifth second Heuer limited edition stopwatch. Other than that it will also feature a TAG Heuer Meridiist mobile phone.