If you feel like having a ferrari but your bank account doesnt allow you, there is always another option, the Porcelain Ferrari 599 GTB Fiorano China Limited Edition.Read the full news from Bernama below. 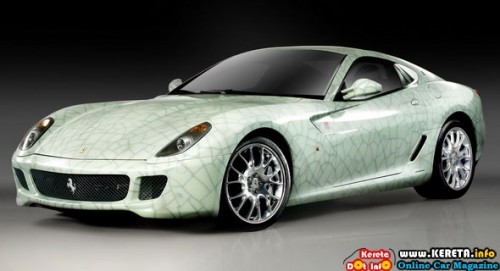 Ferrari will introduce a unique one-off 599 GTB Fiorano China Limited Edition, signed by Chinese artist Lu Hao, which will be auctioned on Nov 3 at a special Gala Auction Event hosted by Ferrari in Beijing.

A limited series of specially-designed 599 GTB Fiorano China Limited Edition models – less than a dozen – was announced in Sept, and this one-off incorporates a number of the features of the CLE, which is finished in two-tone Rosso Fuoco with silver roof and characterised by unique Chinese design elements.

This rarity represents an even more exclusive version, thanks to a very special exterior finish which draws inspiration from Ge Kiln porcelain of the Song Dynasty – the exterior features a ‘cracked’ glaze pattern which is elegantly coloured, with clearly defined cracks etched at different depths.

Only a few hundred pieces of Ge Kiln porcelain exist today, all of which are naturally priceless treasures, so it’s a case of the rare being the inspiration for the rare.

Part of the proceeds generated from the sale of this car will be used on an educational sponsor programme aimed to help young Chinese students in the automotive engineering field.