The German BMW tuner, G-Power had did it again.This time it is a BMW M3. They had built a supercharger kit for the BMW M3 and call it Tornado.But the G may as as well stand for ‘gentle’ as it only gives out a little extra power on the 4.0 liter V8 engine, a mere 0.3 bar of additional boost, to a total of 500hp from the stock 420 hp and pumping and extra 80 Nm of torque from the original 400Nm. The additional horsepower is achieveable by the use of the T1-518 ASA centrifugal supercharger which is the core of the Tornado system.The T1-518 ASA is also used in several ALPINA models including the ALPINA B6 GT3 race car. The supercharer kit will give an extra consistent 20 percent more torque than on the standard M3. With all the additional torque, a sprint from a standstill to 200 km/h had increased from 15.8 seconds to 13.4 seconds. And top speed is also more than 32o km/h. 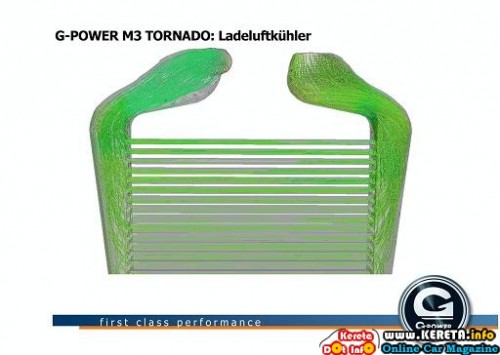 The tuner is also providing a 4-trim sport muffler for a ‘throatier’ tone to the already well-designed BMW sound. For the interior, a G-Power badged speedometer had been fitted which reads up to 360 km/h. Carbon panelling and specialty leather finish can be found all over the place. An aluminium pedal set fills up the legroom of the car. The supercharger is also badged and stamped with a serial number.