The Malaysian F1 Grand Prix start at 5pm this year rather than the original 3pm flag off, And the decision of delaying the flag off time may not be a wise choice after all.Read the full story from thestar below. 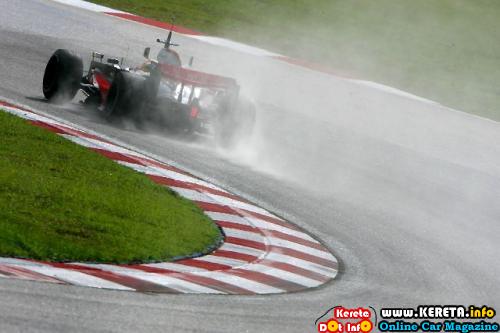 SEPANG: The Malaysian F1 Grand Prix was supposed to be the stiffest test of endurance but this year’s race will be remembered by the motorsport fraternity as a washout.

The race at the Sepang Circuit last Sunday was red-flagged after just 32 laps as a torrential downpour made the conditions too dangerous for the drivers.

It was the first time since the in­­augural Malaysian GP in 1999 that the race did not run its full course of 56 laps and it was debatable whether the decision to have a later start time was a wise one.

The organisers and promoters of the GP, the Sepang International Circuit (SIC), moved the start from 3pm to 5pm as a compromise with the Formula One Management (FOM) after deciding not to proceed with a night race.

It was also to meet the demands of the F1 decision makers, who wanted to attract a bigger television audience in Europe.

But as it turned out, the move put the Malaysian GP in bad light. It was not just the drivers who were unable to go the full distance to earn the maximum points (the top eight finishers were awarded half points) but the paying fans must have felt short-changed too.

The SIC will want to avoid a repeat and there is a big possibility the flag-off time for the race next year would revert to 3pm or be pushed back by an hour.

The SIC chief executive officer, Razlan Razali, said: “We already had a discussion on this when the race was suspended. We definitely need to propose for a more suitable time for our race. The issue here is whether we have enough daylight and on Sunday, this was not the case.”

However, Razlan said that nobody should be put at fault as it was an act of nature.

“It was not just the fans who were dissatisfied with a shorter race but I think everyone involved in F1 also lost money,” he added.