In keeping with the style and seduction of its latest creation, Renault choose the most glamorous weekend in Europe’s social calendar to take the wraps off of the Laguna Coupé at the Cannes Film Festival and Monaco Grand Prix.
The flowing lines of the newcomer’s elegant, uncluttered design exude a sense of timeless beauty and the promise of pure driving pleasure. Its performance provides unprecedented pleasure behind the wheel thanks to the combination of its Active Drive chassis equipped with four-wheel steering – which has been acclaimed by the media across Europe on the GT version of Renault Laguna – and the two new V6 powerplants which have been introduced at the same time on this brand enhancing model. The brand new V6 dCi, which is poised to become a benchmark in terms of performance and pleasure, delivers 235hp, while the new 3.5-litre petrol-powered V6 offers 240hp. Laguna Coupé stands out as an inspiring four-seater with genuine sensual appeal and will be shown in greater detail at the forthcoming Paris Motor Show in October.

The flowing lines of Renault Laguna Coupé’s elegant, uncluttered design exude a blend of timeless beauty and the promise of sheer motoring enjoyment. There is no mistaking the production version’s similarity to its show car predecessor, unveiled at the Frankfurt Motor Show in September 2007, and from the Laguna range at the top of which it will sit. With a length of 4.64 metres and width of 1.83 metres, its proportions are nicely balanced, while the character line which stems from the grille rises forcefully along its flanks, like a wave of air, gracefully underpinning the design of its front wings before extending rearwards to highlight its muscular haunches. The glazed area of its windows is shown off to its best advantage by a pure, flowing arc. Sitting on its 17- or 18-inch alloy wheels, Laguna Coupé’s stance evokes a sense of dynamism and power thanks to a wheelbase dimension of 2.69m and height of 1.40m. This sense of purpose is echoed by the pronounced crease lines of its long bonnet and by its new variant headlamps. The rear, meanwhile, features a very short overhang and broad, slim lights which give Laguna Coupé a bright, distinctive lighting signature which suggests refinement and power, especially at night when the indicators form a halo that picks out the contours of the thin red LEDs.

Developed jointly by Renault engineers and specialists from Renault Sport Technologies, Laguna Coupé’s technologically-advanced Active Drive chassis guarantees the ultimate in dynamic performance. Its outstanding agility and stability set new standards when it comes to safety and surefooted handling, as well as cornering with unrivalled directional precision as if it were on rails.

Following its introduction on the GT version of New Laguna, this chassis has naturally been carried over to Laguna Coupé and is particularly suited to being powered by the new car’s V6 engines. At low speeds, the Active Drive chassis and four-wheel steering system enhance manoeuvrability and it takes drivers no time at all to familiarise themselves with their characteristics. In urban driving, as well as on twisty roads, the car is easy to drive and offers outstanding handling precision. It makes choosing the optimal cornering line intuitive, while the driving experience is enhanced through the absence of body roll through bends and by its directional precision at small low steering wheel angles. 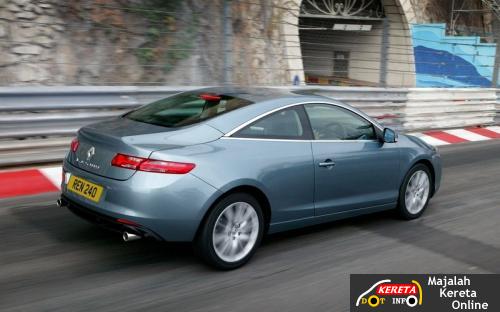 On the active safety front, the Active Drive chassis equipped with four-wheel steering excels not only under braking in difficult conditions (asymmetric grip, deployment of ESP), but also when taking avoidance action (the so-called ‘elk test’). In addition, the high level of travelling comfort ensures peace of mind for all occupants who can sense Laguna Coupé’s unrivalled active safety.
Powertrains with pedigree

Under the bonnet of Renault Laguna Coupé, the brand-new V6 dCi, which is destined to become a benchmark in terms of performance and driving pleasure, develops 235hp and peak torque of 450Nm. The same figure for the petrol 3.5 V6 powerplant, which is mated for the first time with the AJ0 automatic six-speed transmission it shares with the diesel engine, is 330Nm, with maximum power of 240hp. In this configuration, Renault Laguna Coupé can accelerate from rest to 62 mph in less than seven seconds. It also naturally benefits from the best engines available in the rest of the New Laguna range, in particular the top performing versions of the range’s two-litre petrol and diesel powerplants.

Friday, 23 May saw the launch of a bespoke Renault Laguna Coupé micro-site. Building on the success of the Renault Laguna launch in 2007, the experience has been carried over for customers wishing to find out more about Laguna Coupé. The www.laguna-coupe.com micro-site has been developed in an exclusive European partnership with Microsoft®. Thanks to a landmark innovation known as ‘Deep Zoom’ technology, it has been designed to evolve constantly depending on the latest news to offer an immersive experience at the very heart of this exceptional coupé.

Renault Laguna Coupé will be shown in greater detail at the forthcoming Paris Motor Show and will be available for international media road tests immediately after that. As the spearhead of the Laguna range, it has been designed to offer sheer driving pleasure and plays a key role in Renault’s brand’s expansion in the luxury end of the market. Renault Laguna Coupé epitomises this savoir-faire when it comes to driving pleasure and quality which is built into its genes and which can be seen in the finish which meets even the most demanding standards. Laguna Coupé will be introduced progressively across the Renault sales network from mid-October featuring a long list of high-end equipment.