PROTON SAGA BEST PASSENGER CAR OF THE YEAR + EXORA AS A BEST DEBUT!

Proton again wins the best car of the year through its best two model which is Proton New Saga as the Best passenger car of the year 2010 and Proton Exora for the best debut of the year 2010. The improved quality and car worthiness in Proton Saga beats Perodua myvi. Latest sales number also shows that New Saga is more worth to buy than the old Myvi.

Perodua only managed to get the best value for money through its cheapest car in Malaysia, Perodua Viva due to the most affordable price. Perodua didnt managed to get people’s attention from the debut of Alza while Proton gets Malaysian attention to the first MPV made by Malaysian. Read further news from Btimes and report from Frost and Sullivan below:

PROTON SAGA BEST PASSENGER CAR OF THE YEAR + EXORA AS A BEST DEBUT!

Three companies in the automotive industry were honoured at the 2010 Frost & Sullivan Malaysia Excellence Awards yesterday.

“There has been some remarkable performance by Malaysian companies during a time of what was otherwise a tough year for the global economy,” Asia-Pacific managing director and partner for Frost & Sullivan, Manoj Menon, said in a statement. 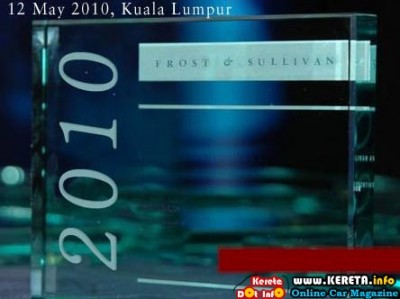 Addressing the C-level gathering of over 200 C-level guests, partners and media, Asia Pacific managing director and partner for Frost & Sullivan, Manoj Menon, said, “There has been some remarkable performance by Malaysian companies during a time of what was otherwise a tough year for the global economy. For that alone we extend our congratulations to each and every recipient tonight for their exemplary achievements.”

Mr. Menon added that, “The objective of recognizing excellence across diverse industry sectors in one forum was to encourage companies to explore cross industry partnerships. The integration of technologies such as Smart Grids, Electric Vehicles, Cloud Computing, Social Networking and Wireless communication offers companies opportunities to participate in the development of Smart Cities and new lifestyle based services. This will be the key engine of growth for companies in the next decade.”

Jafizwaty Haji Ishahak, associate director for Frost & Sullivan, and the chairwoman for the Malaysia Excellence Awards elaborated on the award selection process, “The market is scanned by our leading analysts, who track the individual business sector closely. Companies that stand-out in this research are short-listed and further evaluated against each other by a regional team of Frost & Sullivan experts who eventually identify the deserving recipients.”

A total of 11 leading organizations including well-known home-grown players as well as multinational corporations operating in the local space were honored at this high-profile celebration. Leading the healthcare sector with their best practices were StemLife and Prince Court Medical Centre. Recipients from the Industrial Technologies sector included Smart Surface and Novaviro Technology, while Sime Darby Property Berhad and Bumi Armada Berhad were the sole recipients for Environmental & Building Technologies and Energy & Power Systems categories respectively.

Other recipients for the automotive category were Perodua and Ingress Corporation Berhad. Perodua clinched the Best Passenger Car Value-for-Money Model of the Year for Perodua Viva for the third consecutive year.

Meanwhile, Ingress Corporation Berhad was presented with the Automotive Component Manufacturer of the Year.

The short-listed companies for the 2010 Frost & Sullivan Malaysia Excellence Awards are evaluated on a variety of actual market performance indicators, which include revenue growth; market share and growth in market share; leadership in product innovation; marketing strategy and business development strategy.