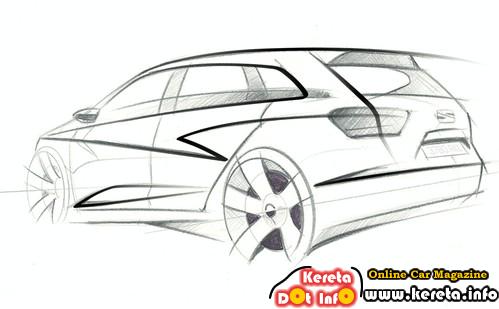 New Contribution By Leong Me

Seat is going light on the details for the forthcoming Ibiza ST (Sports Tourer). They’ve released this sketch and that’s about it, so far.

What do we make of it?

Well, first off, it is about time that Seat start leveraging some of the talent and know-how of the VW Group to benefit their brand, which some can accuse VW of having neglected on occasion since they declared that Seat would be a “sporty” marque potentially aligned with Audi and then left it at that. So here they’re putting some Audi sportback styling flair into an ST version of the Ibiza which seems a smart and logical fit.

And there’s more VW Group input via SEAT’s design chief Luc Donckerwolke, formerly of Lamborghini, who has ushered the ST along. You can see elements of his Arrow Design concept at play and the ST’s styling looks inspired, but the references to the A3 sportback are obvious, which isn’t a bad thing at all, though.

No details on what the Ibiza ST will be sporting under the hood but chances are it will be some variation on the the VW Group’s 1.4 liter TFSI engine that has seen its power output dialed up to 180 hp and 250 Nm of torque on the Ibiza Cupra model. The 1.4 TFSI is also currently available in the Golf with an output rating of 160 hp. The ST will also likely see VW’s 7-speed DSG transmission too.