Thought a Peugeot 407 is sexy enough? Think again. There will be a replacement for the sexy 407 which is the Peugeot 408.Few spyshots of the upcoming 408 can be seen al over the internet and this should give us more idea on how does it actually look like.

From the picture, we can clearly see a sleek sporty profile with large split 5-spoke rims.The 408 will replace the Peugeot 407 which was launched in 2004 with several body variants such as a station wagon, a two-door coupe and a sedan. 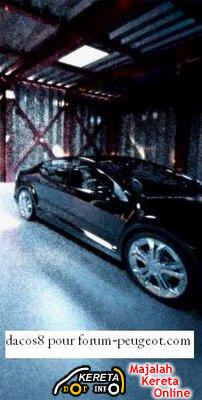 It seems that the 408 is ready for production. Hopefully it will be unveiled in Geneva Motor Show in March. But it would be a surprise to all since the current 407 just received a new facelift.

Peugeot could be preparing for a busy year. Recently the French manufacturer unveiled the new 3008 crossover while a 7 seater variant of the 3008 is coming soon.

There is no update on price and availability of this model in Malaysia. Hopefully this model is brought into our local market.