This Modified Toyota Prius Hybrid tuned by AXI uses tyres & Wheels = 225/40R-18 18 inches sport rims, custom front and rear bumper, a simple side skirts and some interior modification. Picture taken from our Osaka Picture archive. Below are some of Prius details and the picture of modified Prius.

The estimated fuel-efficiency rating, using the U.S. EPA combined cycle, is 50 mpg-US (4.7 L/100 km; 60 mpg-imp. The Prius was the most efficient car powered by liquid fuel available in the U.S. in 2009, based on the official rating. Only the first-generation Honda Insight (2000–2006) equipped with a manual transmission attained a lower fuel consumption rate. 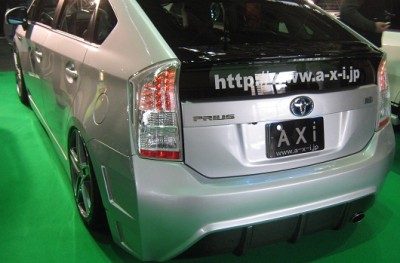 The 1.8-liter gasoline engine (previously 1.5 liters) generates 98 hp, and with the added power of the electric motor generates a total of 134 hp (previously 110 hp). The larger engine displacement allows for increased torque, reducing engine speeds (RPM), which improves fuel economy at highway speeds. Thanks to its electric water pump, the Prius engine is the first consumer automotive production engine that requires no accessory belts, which also further improves its fuel economy. The electric motors and other components of the hybrid powertrain are also smaller and more efficient than the industry average. Toyota estimates the new inverter, motor and transaxle are 20 percent lighter. Disc brakes replace the previous rear drum brakes.

Sorry for the picture quality. the picture of modified interior roughly tells us about the red leather wrap around the door panel and steering.