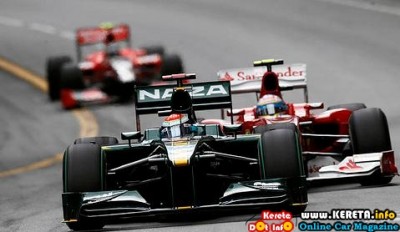 Lotus Racing leave Monaco with mixed emotions after a very impressive display during the race came to an early end for both cars with only a few laps remaining. Despite this, the team demonstrated impressive pace throughout the race, making good on the promise shown in practice and qualifying, and will see the race as another step forward in experience and performance.

Heikki Kovalainen (Lotus Cosworth T127-01, retired lap 59) “It was a fantastic race right from the beginning. I had a bit of a struggle at the restarts to get the tyres up to temperature, but once I got everything working I was able to almost keep up with the Renault. I was pushing very hard, and the car felt fantastic – the balance was really good. Just before I retired I could feel the steering alignment was a bit uneven – on the right hand corners I had to use maximum lock, even in the tunnel, and it got the point where it didn’t feel safe anymore. In Monaco you can’t take a risk with it so I came in. It was a mechanical issue, but despite that I’m really pleased with today. We again showed we’re firmly the best of the new teams and we are nearly there with the next group, so I think we just need to keep attacking, and that’s how we’ll achieve results.”

Jarno Trulli (Lotus Cosworth T127-03: Retired lap 71) “This wasn’t a great weekend for me. After we had a problem with the wheelgun in the pitstop I was stuck behind the HRTs and trying to find room to overtake – in the last lap Karun seemed slow through the second and third sector, and I’d seen he was leaving room at Rascasse, so I tried to get through but we touched and that was that – the end of the race. It was one of those things – a racing incident, but I still feel like we’re going in the right direction as a team, and I want to put the bad luck behind me when we get back on track in Turkey.”

Mike Gascoyne, Chief Technical Officer: “This was our strongest performance yet compared to the midfield, so obviously mixed emotions for where we finished. Heikki had a very strong race and in the middle his performance was particularly good compared to the midfield group. It’s a shame we had a problem on his car – the steering joint failed, something we’ve not seen before – but overall it was a very positive weekend for him. For Jarno, he had a much more difficult weekend, clearly struggling with the balance of the car and I think as a team we have to take a look at everything to be able to do a better job for him. Obviously he was compromised by the slow pitstop, which dropped him down the field and affected his whole race. He was capable of going much faster and when he made the move he unfortunately fell victim to the nature of the Monaco circuit. So I leave feeling pleased we showed such good pace, and we move on to Turkey.”

Tony Fernandes: “I take a lot of positives from the race today and it was another one where we had at least one car classified. Most importantly Heikki made a great step forward and it was fantastic watching him race with Petrov. He and the whole team felt it was the best race of the season for him and that boosts confidence further for the season ahead. We’ve got some more new parts coming which will continue to take us forward, and hopefully Jarno’s luck will turn, but even with that we’re all pleased. It’s also great to see so many of our fans out around the track – hopefully we gave them some good racing today, and in years to come we’ll give them some good results as well.”