LOTUS COSWORTH T127 UNVEILED FOR THE FIRST TIME IN MALAYSIA.

Lotus Racing unveiled the Lotus Cosworth T127 for the first time in Malaysia at pavilion today.Read the full news from Autoworld by Kon below.

Ahead of its home debut at the Sepang International Circuit in the upcoming Malaysian F1 GP, Lotus Racing organized a special ‘homecoming’ celebration at Pavilion Kuala Lumpur. Present at the event were team drivers Jarno Trulli, Heikki Kovaleinen, and Fairuz Fauzy to unveil the Lotus Cosworth T127 for the first time in Malaysia. 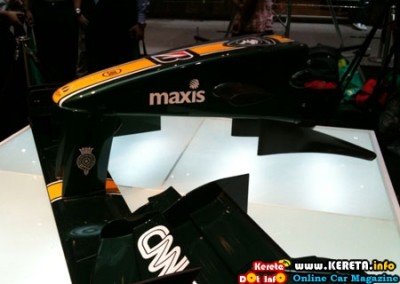 In its debut race at the Bahrain GP both Lotus cars crossed the finish line, with Kovaleinen and Trulli finishing 15th and 17th respectively. Kovaleinen raised his game at Melbourne last week to finish 15th, but Trulli failed to get his car off the starting grid due to hydraulics failure.

According to Deputy Team Principal, En SM Nasarudin SM Nasimuddin, the Lotus team is in good spirits going into the Malaysian GP at the Sepang International Circuit this weekend, and the team expects further improvements in its home debut.

“We expect the race in Sepang this weekend to be another exciting outing for Lotus Racing. Heikki’s finish, just three places away from earning our first point in Melbourne, gives us a good boost for the coming race in Sepang,” SM Nasarudin said.

Before it hits the track at Sepang this weekend, the Lotus Cosworth T127 will be on display at Pavilion’s main concourse from 3pm to 10pm today. Other activities planned include an autograph session with Trulli, Kovalainen, and Fairuz.

“This is the real Lotus Cosworth T127 that will be racing in Sepang on 2-4 April. This is a very rare opportunity for our fans to see our actual car up close,” added SM Nasarudin.