Kepler Motors,  a California based company will debut its latest hybrid supercar in Dubai.The supercar, called Motion is said to be officially revealed during the 2009 Dubai International Motor Show, which runs from December 16 to 20.

The all-wheel-drive vehicle gets its power from a 550-hp, modified Ford EcoBoost twin turbo 3.5-liter V-6 that drives the rear wheels and acts independently of a 250-hp electric motor that drives the front wheels. 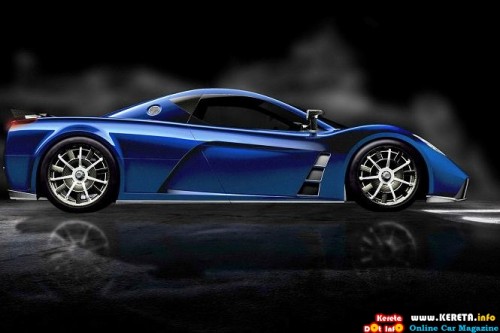 The two-engines produce a combined output of 800-horsepower propelling the all-wheel drive gasoline-electric supercar from zero to 60mph (96km/h) in a claimed 2.5 seconds and on to a top speed in excess of 200mph or 320km/h+. To keep the weight down, the Motion uses a carbon fiber body. Kepler says the two-seat cabin is designed to hold people of above-average size, suggesting the company expects luxury buyers rather than racers. The company said that it will limit production of the hand-assembled Motion to just 50 units with deliveries expected to start sometime in 2011.