Audi, a car manufacturer which well known as the leading manufacturer in car LED lighting technology now offer fully LED headlights to the New A6. The main light source came from super bright LED have a few amazing function which is better than normal bulb headlamp. Read info below regarding the advance LED Headlights By Audi. 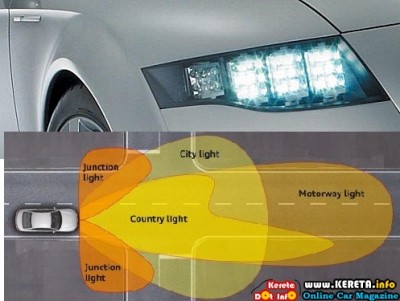 : The new Audi A6 is all set to outshine its premium sector competitors as the world’s first executive sedan to feature all-LED headlights.

Available as an optional alternative to the more familiar halogen or bi-xenon lamps also offered, the advanced LED units emit a strong white light that is similar to daylight, and use just 40 watts of electricity each.

The sophisticated LED units use just four one-chip and five two-chip LEDs to create dipped-beam light, and 24 white LEDs to make up the daytime running lights in each headlight. This keeps power consumption and maintenance down, and assures a long service life.

High beam assist at work.
The Audi R8 was the first ever production car to feature all-LED headlights, which are now fast becoming a staple option across the Audi model range. All-LED headlights are also now available on the A7 Sportback and A8 luxury saloon, along with the new A6 sedan.

The new LED lights are further enhanced by intelligent systems such as adaptive light control and high-beam assist, which give maximum visibility without dazzling other road users. The adaptive light system adapts the light provided by the headlights to the driving situation, with different arrangements of light when driving in the city, on country roads and on motorways.

The headlight control unit uses a small video camera in the base of the rear view mirror and route data from the optional MMI navigation plus navigation system to anticipate changes in ambient lighting. For example, the cornering light arrangement can be triggered before the car reaches a junction or corner to aid visibility on approach.

The high-beam assistant automatically varies the range and width of the headlights between dipped and full beam according to the road situation.