It seems like just yesterday we were celebrating the beginning of another season of Formula 1. But here we are on the eve of season 2009. The rules have changed, the cars have changed and the drivers have moved on or out. But the sport is as spectacular and colourful as ever. So the tale 2009 will be the same as it has been for the past several seasons.

As part of the package of aero changes designed to reduce downforce for 2009, the diffuser has undergone quite complex modifications. Moves to create a more standardised shape have removed the difference in height between the central and two outer sections and all three channels are now taller – 175mm rather than 125mm. In addition, the diffuser has been moved rearwards, with its trailing edge now 350 mm behind the rear axle – previously, it was level with the rear axle.

Toyota’s diffuser makes a very interesting interpretation of the revised 2009 rules (and one that has already prompted speculation regarding its legality). By exploiting regulations that allow extra bodywork within a 150mm zone in the centre of the car, the team appear to have cleverly shaped the TF109’s rear crash structure (upper red arrow) so that it effectively lengthens and heightens the diffuser’s central section, which also features a very low splitter at its base (lower red arrows).

McLaren, Ferrari, Renault and BMW Sauber have all made very literal interpretations of the revised 2009 rules regarding the rear diffuser. All of the channels are the same height and length, with no difference in height between the main central section and the side channels. This contrasts with the designs of Toyota and Williams (see subsequent illustrations), which interpret the new regulations slightly differently.

Only weeks after the introduction of the 2009 cars, the legality of the Williams FW31 and the Toyota TF109 has been questioned by some of their rivals, ‘autosport’ reports. It appears that some of the teams are seeking clarification from the FIA about the height of the rear diffusers.

Renault will be one of the teams asking the governing body to make a clarification on the rear diffusers. Pat Symonds said: “We will be asking the FIA about it, but we haven’t yet.”

The issue is apparently about an area that allows the extension of the diffuser 75mm left and right of the car’s centre line. In reality, this enables the engineers to still create a longer central channel right under the rear light. 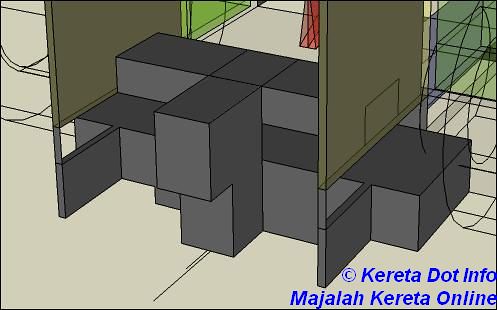 The rules that define this area state the following:

3.10.5 Any parts of the car less than 75mm from the car centre line and more than 500mm behind the rear wheel centre line must be situated between 200mm and 400mm above the reference plane.

3.10.6 No part of the car less than 75mm from the car centre line and more than 350mm behind the rear wheel centre line may be more than 400mm above the reference plane.

While one can argue that using this area as a diffuser part would contravene the spirit of the rules, there is very good reason to think that the design will be approved and that all teams will follow suit. 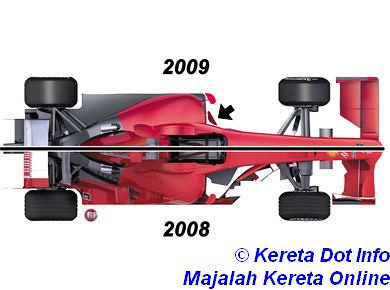 From overhead, the clearest difference between the 2008 and 2009 designs is the increased width of the front wing, now as wide as the car itself at 1800mm. Gone are the fairings on the front suspension pick-up points (where the suspension attaches to the chassis) and the use of turning vanes is now restricted to a small triangular section (see arrow) in front of the sidepods. Cooling vents, chimneys and winglets are noticeably absent from the top of the sidepods and there is no winglet on top of the rear axle. The rear wing is narrower (750mm instead of 1000mm) and taller (950mm as opposed to 800mm) and the diffuser has been moved further back.

As part of the aero changes designed to allow cars to be able to follow each other more closely (and hence promote overtaking), the 2009 front wing is both lower (75mm instead of 150mm) and wider (1800mm instead of 1400mm). The wing also features a universal central section (500mm), which all teams’ designs must comply with this season, and a flap section that can be adjusted by the driver twice a lap over a range of six degrees.

The regulation changes for 2009 are some of the most extensive ever introduced to Formula One racing and fall into three main areas – aerodynamics, KERS and tyres. Formulated with help from the Overtaking Working Group’s (OWG) engineers, the new rules aim to (1) reduce the aerodynamic sensitivity of the cars to turbulence; (2) increase overtaking opportunities; and (3) slow the cars in the very quick corners. To compensate for the loss of downforce from the aerodynamic changes, slick tyres have been brought back for the first time since 1997 to boost mechanical grip. As a result of the changes the 2009 cars appear quite different to their predecessors, with the removal of the vast majority of bargeboards (now only allowed in a very small area – see red arrow), winglets, chimneys and cooling gills leading to much cleaner looking designs. Forthcoming Technical news articles will examine each of the key areas of change in detail.

Kinetic Energy Recovery Systems, or KERS, become optional for 2009. Such systems take waste energy from the car’s braking process, store it and then reuse it to temporarily boost engine power. This and the following diagram show the typical placement of the main components at the base of the fuel tank, and illustrate the system’s basic functionality – a charging phase and a boost phase. In the charging phase, kinetic energy from the rear brakes (1) is captured by an electric alternator/motor (2), controlled by a central processing unit (CPU) (3), which then charges the batteries (4).

In the boost phase, the electric alternator/motor gives the stored energy back to the engine in a continuous stream when the driver presses a boost button on the steering wheel. This energy equates to around 80 horsepower and may be used for up to 6.6 seconds per lap. The location of the main KERS components at the base of the fuel tank reduces fuel capacity (typically 90-100kg in 2008) by around 15kg, enough to influence race strategy, particularly at circuits where it was previously possible to run just one stop. The system also requires additional radiators to cool the batteries. Mechanical KERS, as opposed to the electrical KERS illustrated here, work on the same principle, but use a flywheel to store and re-use the waste energy.