Early this month, Mark Webber  made the most of his Red Bull team-mate’s misfortune to win the Hungarian Grand Prix from Fernando Alonso and Sebastian Vettel.So, for today we want to share some information about the Technical Updates from some F1 teams. This drawing from Hungary shows how Ferrari’s diffuser has been modified to deal with the exhaust air now blowing under the floor, with the element just inside the rear tyres (1) now curved. The diffuser’s side channels (2), which used to be more vertical in shape, are now also curved. The modifications are designed to use the air from the exhaust to better effect.

Toro Rosso have introduced a new maximum-downforce front wing in Hungary. It features a vertical section (1) which creates a kind of skirt under the high shape of the standard nose. The new endplate, introduced in Hockenheim, has been revised to include a second horizontal slot (2), which better ‘seals’ this section to the ground. Since first introducing their exhaust-blown diffuser at Silverstone, McLaren have made many changes to its configuration. In this drawing you can see the reshaped section of underbody (red arrow) and also the different, lower position of the exhaust (highlighted in blue) being used on the MP4-25 in Hungary. 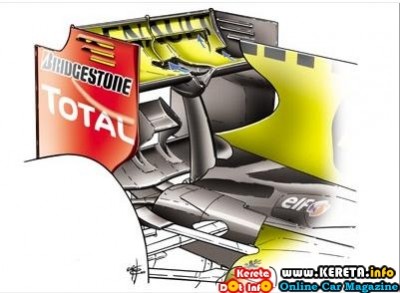 In Hungary Renault introduced this new, high-downforce rear wing. It’s based on the McLaren concept of having two profiles, with a hole passing through, effectively giving the wing three slots. The difference on the R30 is that it’s the flap that has been divided in two, with two separate slots. 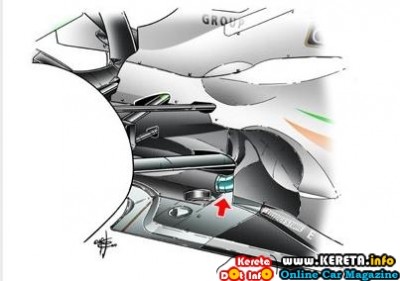 In Hungary, Force India introduced their version of the blown diffuser (see red arrow) to just one car – Adrian Sutil’s. It was tested on Friday, but the team then decided to run both cars in the standard configuration for the race. With the expense of tooling the new exhausts, a dyno test for tuning the exhausts to the engine, the demand for five sets of diffusers and all the wind tunnel and Computational Fluid Dynamics (CFD) programming, it could cost up to an estimated $1.5 million to introduce. 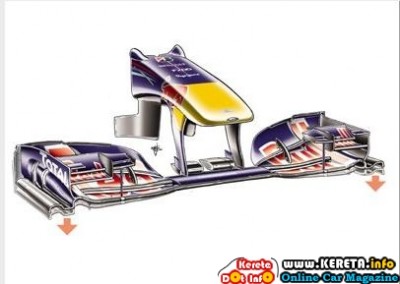 Although TV footage has shown the Red Bull front wing appear to almost touch the track surface at speed, the rules demand that when static it has to stay 75mm above the ground. Even so the car has passed all the necessary scrutineering checks, including a rigorous one on Saturday in Hungary with 200 kilogrammes applied to the RB6’s underbody and the plank.