The Phiaro P67b ETERNITY is a two-seater vehicle which can banks into corners like a motorcycle built for the 50th anniversary of Japanese design company Phiaro and released towards the end of 2005.Recently, It appears again at Kuala Lumpur International Motorshow 2010.The Eternity is a fully-functioning three wheeled concept with remarkable detail and workmanship characterizing its show model. The project was a collaboration of style and technology between several Japanese and European corporations, most notably the well-established Carver three-wheeler developed by Peter Van Den Brink in Holland. 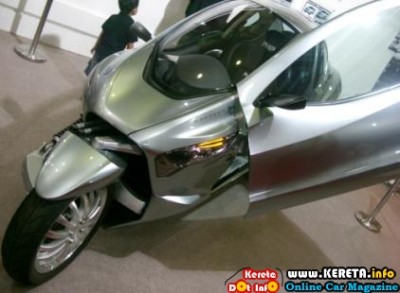 The core technology that distinguished these product is called DVC (Dynamic Vehicle Control).This system enables the body to tilt automatically to the optimum banking angle as the driver turns the steering heel to take curve.

While the body is tilting, all the wheels stay solidly attached to the road keeping optimal grip.

The vehicle will not tip over in virtually every driving condition normally encountered by four wheel autos.