Last January, Proton MD, Dato’ Syed Zainal Abidin has revealed that CUSCO, a Japanese specialist tuning company, will be developing the Satria Neo into a Group N rally competition. And for your information,  CUSCO is famous for their aftermarket suspension systems and other parts such as LSDs and chasiss reinforcements and naturally they’ve also been involved in motorsports including rallying. Being a Japanese company naturally the rally cars that they’ve dabbled with so far are cars like the Impreza and the Lancer Evolution.

Below, watch how CUSCO beautifies our local car with Itasha Design and makes it all nice!. The word Itasha describes a car that has been plastered with stickers of anime (Japanese cartoons) or eroge (Japanese dating sims) characters.
[youtube:http://www.youtube.com/watch?v=nf3eVQREgwQ]

Itasha From Wikipedia.
“Itasha, literally “painmobile”, is a Japanese term for an otaku fad of individuals decorating the bodies of their cars with fictional characters of anime, manga, or video games (especially bish?jo game or eroge). These characters are predominately “cute” female. The decorations usually involve paint schemes and stickers. Automobiles are called Itasha, while similar motorcycles and bicycles are called itansha and itachari, respectively.” 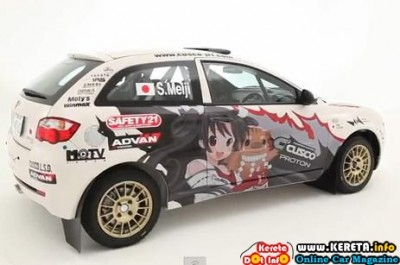