The prosperous chinese new year is coming soon which mean another ops sikap is down the road. Everyone should becareful on the road espaecailly with thw new rear seat belt ruling. So, buckle up guys. 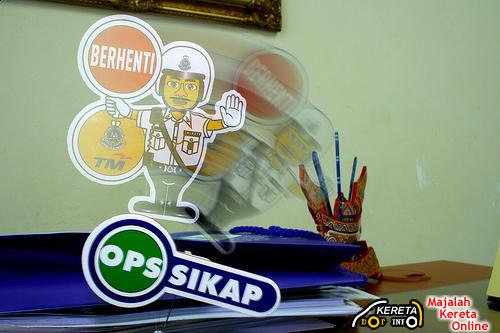 Read the full article ‘Ops Sikap For CNY To Begin Jan 19’ from bernama.

KUALA LUMPUR, Jan 15 — The 19th instalment of ‘Ops Sikap’, or the integrated nationwide police operation to monitor traffic flow and reduce accidents during the Chinese New year festive season, will begin on Jan 19.

Other departments involved are the Commercial Vehicle Licensing Board and the National Anti-Drug Agency.

In an earlier statement here on Thursday, Transport Minister Datuk Seri Ong Tee Keat said that during ‘Ops Sikap’, the speed limit of federal and state roads would be reduced.

He said the speed limit of federal roads would be reduced from 90kph to 80kph while that of state roads, from 80kph to 70kph.

Heavy vehicles would also be banned from using the roads on Jan 24, 25, 31 and Feb 1, to avert traffic congestion.

He said temporary licences would be issued to bus operators to facilitate the shortage of express buses.

Starting Thursday, he said the government would also increase the frequency of its public service announcement and television commercials pertaining to the road safety campaign.

Similar messages would also be distributed via websites and email blast, he said.

Meanwhile, at the launch of a road safety campaign in conjunction with the Chinese New Year festive season at Stesen Sentral, Ong said the government was mulling over a plan to ban the use of mobile phone hands-free kit while driving.

“It is best for us to study the matter thoroughly, especially pertaining to the risks posed to other road-users by those wearing the gadgets,” he said.

Ong was commenting on a news report over a plan to ban the use of the hands-free kit while driving.

On an allegation that the rear-seat belt ruling had troubled the people, especially the low-income group, Ong said it was not the government’s intention to burden the people.

In fact, he said, the ruling was meant to ensure the safety of the people and other road users.

“So far, the feedback has been overwhelming and the wearing of rear-seat belts has increased,” added Ong.

Road Safety Department director-general Datuk Suret Singh, who was present at the event, said a total of 2,452 summonses were issued in just 13 days for rear-seat belt ruling violations.