We want to suggest you today a remarkable impression of a nice Audi, created by designer Ugur Sahir. According to the informations we caught about the project, the author’s muse is said to be nature: what is certain is that design looks quite sports and aggressive, with a perfect balance between straight and round lines.

Let’s dream driving a great 4.2 litres V8 of 420 or even more horsepower, maybe four wheel drive, led lights and a dashing metal red color. Ugur Sahir is quite bizarre, but he still followed the present German family feeling anyway: as a matter of facts, on the front we find the characteristic single-frame radiator grill.

The name Locus means a condition that defines a continuous figure which is a curve.

The main characteristics of the design are the way its surface shapes are formed with a continuous flow from front until the back of the car. Inspiration for that was obviously the Mother Nature we deal with daily but somehow we usually do not realize that everything in the nature has somehow its specific curves and flowing lines it is very rarely to spot perfectly straight lines. The main goal was to implement this design aspect into a car which creates a relaxing, energetic, vibrant and confident feeling. 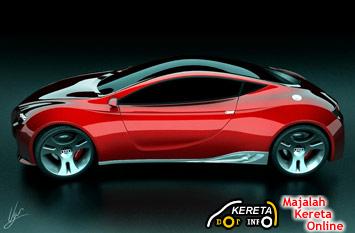 It is clear to see a curved sharp edged line that starts at the very front, flowing through the middle section, slightly curved down after the A pillar and then going back up again at the rear wheel arches to follow its way back until the diffuser. This same curve language is also applied to the greenhouse and the way windows are shaped. The front is somehow aggressive looking with the traditional AUDI grill and air intakes that are shaped very much like the headlights to create a coherent feeling. The rear section is obviously very organic with defined curves and subtle details, tail lights are designed to have integrated air outtakes underneath them to avoid any unnecessary details. With dual exhaust and fairly empty rear section, it creates a feeling of subtleness. Another feature is the air intake at the end of the roof which is designed to avoid any distracting design elements on the top of the car combining elegance with functionality.

Ugur Sahin is an automotive and industrial designer. He currently works for Netherlands-based Modesi.

He also works as a freelance designer in the 3D graphics and art fields – mainly with 3DStudio MAX and Final Render.

Among the web awards received is the second place in the “Concept car design contest” on Cg-cars.com with his Ferrari F-1000 concept.

He designed the Lamborghini Spiga Concept, presented by Car Body Design on 23 February 2007.