The new generation of powertrains will soon have its another member out on the road, Skyactiv announced that the “Skyactiv-G 1.3” direct-injectiongasoline engine will debut on the facelifted Demio (known as the Mazda2 ininternational markets) in Japan this summer.

Roland Rysanek, the owner of the aftermarket company, which specializes onMercedes-Benz models, found himself in front of a dilemma when asked by a North African client to modify the heavyweight American SUV.

Rysanek eventually accepted the job, as the eccentric owner was a loyal client with plenty of Fab Design Mercedes models parked in his garage. particular client wanted the car to look like no other Escalade and to have an interiorlined with genuine snake leather and crocodile-imitating leather lots of it.

However, this decision attracted the fury of animal rights group Pro Wildlife, which said too many snakes are being tormented for the sake of luxurylovers. Roland Rysanek replied that the leather used on the car comes from snakes that have been killed without causing them pain. 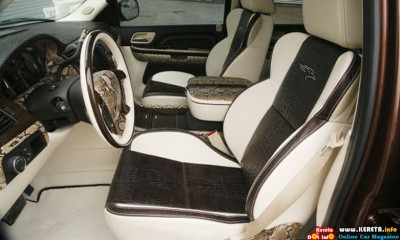