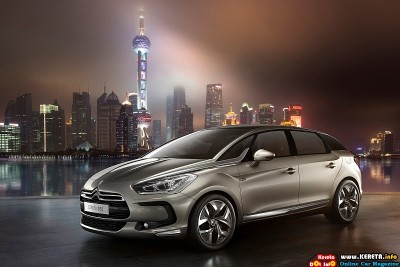 The all-new Citroen DS5 measuring 4.52 meters in length, 1.50 meters in height and 1.85 m in width, the DS5 sits between the C4 and the C5 in Citroen’s range, with the company describing the car as an alternative to the more conventional C5 with a higher ground clearance, more refined interior and a crossover shape. 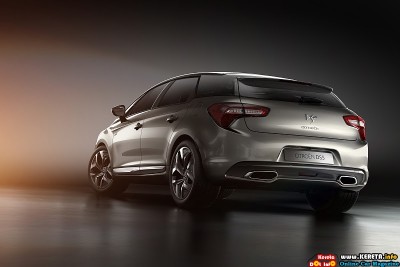 The car will receive its first public outing in Shanghai in show trim featuring special 20-inch wheels, pearlescent gray body color and other enhancements. The Citroen DS5 will be produced in France and is set to arrive in European showrooms at the end of 2011. It will be sold in other markets as well, with first deliveries in China scheduled for 2012.

Although Citroen says the car’s styling is inspired by the C-SportLounge concept car, the DS5 could also be described as a bigger version of the DS4. Its lines are a mix of the DS4 hatchback and the C-SportLounge crossover. The DS5 can accommodate five passengers and their luggage, as boot volume sits at 465 liters.

2012 Citroen DS5 comes with the LED headlamps and the extensive use of chrome. Inside, the DS5 sports a stylish ambiance thanks to the combination of leather, wood and aluminum trim. The flat-bottomed steering wheel, the driver-oriented central console and the special Bracelet seats also contribute to an elegant environment.

The new Malibu sports a new exterior styling with lines and curves inspired from Chevy‚Äôs most recent models such as the Cruze up front and even the Camaro at the back with the LED dual-element taillamps. The exterior design of the all-new Malibu carries DNA from its sister vehicles, the Camaro and Corvette, to bring a sporty sensibility to the family sedan segment.

2013 Chevrolet Malibu comes with featuring a more fluid design with a prominent instrument panel incorporating a pair of Camaro-esque circular gauges set in squared-off housings, and a new top-hinged, flat panel display on the center console that articulates up and down revealing a six-inch-deep hidden, illuminated storage compartment.