Volkswagen Bulli Concept will show at the 2011 Geneva Motor Show. Volkswagen admits that it has the potential to establish a new, fifth brand of people carrier next to the Caddy, Touran, Sharan and its large counterpart the Caravelle.

It is as a electric vehicle, which is powered by an electric motor linked to a battery that enables it to cover up to 300 km (185 miles) on a single charge. The motor’s output is 85 kW, while torque value is 270 Nm (199 lb-ft), available from the first push of the pedal. The lithium-ion battery has a maximum storage capacity of 40 kWh, with Volkswagen claiming that a complete recharge of the battery takes less than an hour when done at an electric refueling station.

The car concept is a development of the Microbus study from 2001. However, at 3.99 meters long, 1.75 meters wide and 1.70 meters tall, with a wheelbase of 2.62 meters, the six-seater compact is more compact than the its predecessor. Volkswagen claims that the interior is spacious enough for six passengers, with three seating up front and three at the back.

Interior of Volkswagen Bulli Concept EV comes with a removable iPad in the center console that serves as an infotainment touchscreen, controlling functions such as Bluetooth hands-free telephone, navigation system and media center.

The boot volume is 370 liters, but it can be extended to 1,600 liters when the rear bench is folded. The Bulli can also be turned into a camper van, since the seat system can be transformed into a large reclining surface.

2011 Audi A3 Sedan Concept study has a dual role as it previews both the design direction of the next generation A3 and the new four-door saloon body style that will be added to the range alongside the three-door hatchback, five-door Sportback and convertible models.

The sedan concept or the RS3 Sedan moniker sounds more appropriate given the RS3 Sportback-sourced 2.5-liter turbocharged five-pot with 408 ponies lurking under the bonnet. 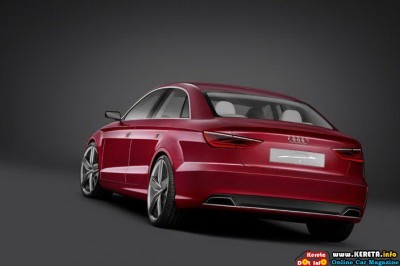