Stuttgart’s SUV has gathered heaps of aftermarket attention in Europe to he second generation of the Porsche Cayenne. Following an announcement earlier this year, longtime Porsche tuning house SpeedART has launched a performance package for the latest Cayenne, dubbed the EVO-XL 600. 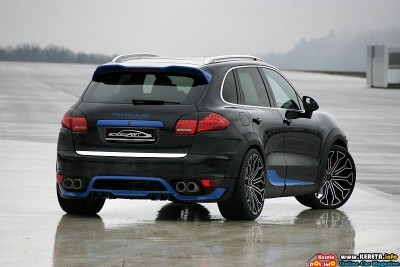 SpeedART proposes single carbon shell-type seats and a multi-media-unit with an iPad and iPod-docking-station for interior.

Then the styling package comprising of a wide-body kit that includes a front apron, wheel arch extensions, rear apron with a diffuser, chunky side skirts and a roof spoiler. The two tone paint scheme and along with a choice of 22-inch or 23-inch lightweight forged alloy wheels, the latter with 315/25 ZR23 tires complete the look.

The German tuner has two different power kits for the Cayenne Turbo models The first is available for order now and boosts the V8 engine’s output to 600HP and 850Nm (627 lb-ft) of peak torque. The second kit is still under development with the company claiming an output of around 700HP.

In addition, the Porsche Cayenne EVO-XL 600 gets sport exhaust system with an optional sound switch control and an electronic lowering module for vehicles equipped with air suspension round off SpeedART’s goods.

Good news, Renault Laguna Coupe Monaco GP special edition is now available for order in France. Renault took the decision to build a second run of the Monaco GP to satisfy customer demand after all 400 units of the previous version were quickly sold out.

The interior of special edition sports a Pearlescent White trim on the central console, doors and dashboard and a two-tone fabric upholstery, featuring black and grey accents. Other styling details include aluminum pedal assembly and gearlever knob. Like the standard model, the Laguna Coupe Monaco GP can be ordered with the optional 4Control chassis (€2,000) that offers four-wheel steering, improving handling.