It is a new car of Top Marques Monaco show in mid-April to get our first taste of the new Spada Codatronca Monza. Based on the Spada Codatronca TS coupe that was revealed at the same show in 2008, the Monza is a hardcore speedster model aimed primarily for weekend track racers.

The new Spada Codatronca Monza makes use of the Corvette Z06’s 7.0-liter V8 supercharged to develop around 700-horsepower. Spada Vetture Sport’s latest creation will be built in limited production run

The aggressive-looking Mi-ray was developed by the GM Advanced Design Studio in Seoul and pays homage to the bow-tie brand’s sports car heritage. The roadster uses styling cues from Chevy’s 1963 Monza SS and the 1962 Corvair Super Spyder, but also from aircrafts, with its aerodynamic fuselage being reminiscent of modern jet fighters. Elements like the scissor-doors, the pronounced wheel-arches and the sharp front bumper add further drama to the Mi-ray’s appearance.

The Chevrolet Mi-ray Concept’s bodywork is made of lightweight materials such as carbon fiber and carbon fiber reinforced plastics, while the turbine-shaped wheels (20-inch front/21-inch rear) are made of aluminum-carbon fiber composite. 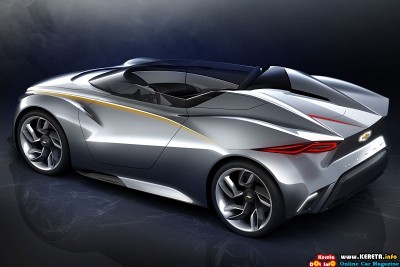 In interior the cockpit-like interior is split in two areas by a high center console and contains a mix of brushed-aluminum, natural leather, white fabric and liquid metal surfaces. The steering-wheel and the centrally located start button are also inspired by jet aircrafts, while information is displayed on the instrument panel by means of back projection.

The engine is using hybrid performance with “mid-electric” by Chevrolet. A mid-mounted turbocharged 1.5-litre petrol engine drives the rear wheels, while two front-mounted electric motors, each delivering 15kW (20 horsepower), send their juice to the front wheels. The electric motors are fed through a 1.6 kWh battery located on the floor of the car, behind the seats. The 3.99 meter-long Mi-ray is also fitted with regenerative braking and start-stop systems and can run on electric power alone in the city, although Chevrolet didn’t reveal details on the driving range.

Also the roadster model can also be switched from front-wheel drive to rear-wheel drive.