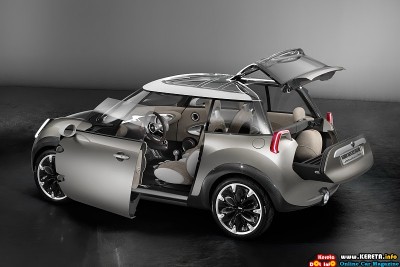 The exterior of MINI Rocketman Concept features such as LED head- and taillights, 18-inch wheels, a split-tailgate and illuminated roof braces that imitate the Union Jack.

The MINI Rocketman Concept also uses creative design and innovative technical solutions to open up new layout options for the luggage area. An intelligent folding mechanism makes it possible to lock the cargo drawer of the MINI Rocketman Concept either higher up or further in towards the passenger compartment, as the loading scenario demands. This allows loads to be transported out of sight and protected from the weather.

While in interior there are three permanent seats and one fold-down number for short journeys. The permanent ones are on rails to maximise interior space and the instrument cluster moves backwards and forwards with the driver. MINI’s trademark Centre Speedo makes its customary appearance, albeit this time offering high-resolution 3-D graphics, in-car internet and a detachable hard drive that can be taken anywhere. A trackball on the steering wheel replaces the iDrive-esque unit on current model MINIs.

Smart is presenting an unconventional study, the Forspeed Concept combines contemporary urban mobility with the fun factor typical of smart. The two-seater has no roof or side windows and it features a low wind deflector instead of a windscreen in the style of a classic propeller aircraft. The result is an incomparable fresh air driving experience.

Daimler’s minicar maker is bringing an all-electric, roofless version of the Smart ForTwo to the Geneva Motor Show, and the Forspeed concept looks surprisingly similar to the the Smart Speedster we got a peek at a few weeks ago.

Smart Forspeed is a pure concept, it comes equipped with some interesting taillights, no external door handles and since it’s sans-roof, there’s a toneau cover that can either coat the entire interior or just the passenger side if you get caught in the rain.

2011 Smart Forspeed Concept support by 41-hp electric motor can yawn the car all the way up to 37 miles per hour in 5.5 seconds and provide a top speed of 75 mph. That’s not excatly “speedy” as the name implys, but the boost button you see on the dash offers another seven ponies. More important is the ED part of the clumsy “ForspeED” name; it refers to the Electric Drive powertrain that we also find in the Fortwo ED. At least the concept hits 37 mph a second sooner than the standard Fortwo ED.