Amari Design is a new company in the tuning scene, its take on the Bentley Continental GT to gets upgrade package includes a body kit, interior revisions and a variety of modifications under the hood. 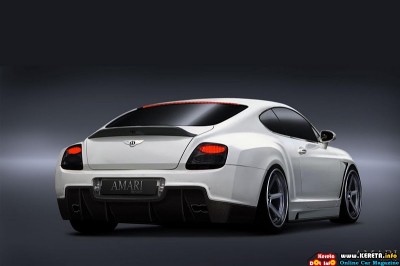 The car also gets a supercharger, a sports exhaust system and a new ECU, Amani Design says output is lifted to 750-horsepower. The car also rides on beefier alloy wheels and tires, though the tuner has not yet released specific details.

While Bentley Continental GT’s interior will comes upgraded with carbon fiber trims and upholstered seats in a combination of Napa leather and Alcantara.

Meet the new red hot 2012 Chevrolet Camaro ZL1, the most technically advanced Camaro in its 45 year history. Named after Chevrolet’s all-aluminium racing engine from the late 1960s, the ZL1 is equipped with an LSA 6.2-litre supercharged V8 that outputs an estimated 410kW of power and a mind boggling 745Nm or torque!

The same basic engine is found under the bonnet of Holden Special Vehicles, which incidentally is a close cousin of the Camaro. That is because underneath those sexy metals, sits a Holden developed Zeta rear-wheel-drive architecture. In fact, Holden played a significant role in engineering the Camaro’s ride and handling

Drive is sent to the rear wheels via a 6-speed manual transmission with a dual-disc clutch system and a shorter-throw shifter. The range topping Camaro also sits on revised suspension with Magnetic Ride Control. Stopping power comes courtesy of high-performance Brembo brake system with six-piston callipers up front and four at the back. The electronic power steering system has also been uprated to provide a sportier drive.

On the exterior, the ZL1 is distinguished by a new front bumper and bonnet with a signature centre bulge made of carbon fibre and rendered in satin black finish. The bulge also incorporates functional air extractors. At the rear, there is a larger boot lid spoiler and quad exhaust tips. 20-inch lightweight alloy wheels shod in Goodyear Supercar F2 tires complete the exterior upgrade.

Interior upgrade though, is much less noticeable, with sport seats clad in microfiber suede inserts, new trims throughout and a flat-bottom steering wheel that’s almost identical to the one found on the Holden/Chevrolet Cruze.