Audi has released the final specs of its upcoming 2009 Audi Q7 V12 TDI performance SUV. Powered by a mighty but fuel efficient V12 diesel engine, the premium SUV will take only 5.5 seconds to accelerate from zero to 100KM/H and will deliver fuel efficiency of 20.8 mpg (11.3 liters of diesel fuel per 100km). Not bad for such a monster of a car.

The huge crossover SUV comes equipped with an aluminum chassis with a double wishbone suspension set-up up front and sports an adaptive air suspension as well as electronically controlled shock absorbers with dynamic roll stabilization. Sporting a set of standard 20-inch wheels and steel brakes, the car may also be fitted with 21-inch alloys and 20-inch carbon-ceramic brake disks with eight-piston brake calipers front and four-piston on the rear. 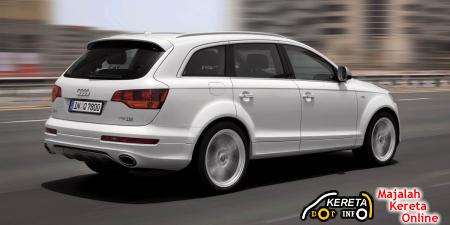