Here is some pictures or photos of weird and strange cars. Above picture is a shark truck. Dont know what actually the function is. But it is equipped with jet engine. Might be the most fierce face cars. =)

The Judge Dredd Land Rover (made specially for the film) an example of which can be seen in the Rover Heritage museum at Gaydon, England.

The Dobbertin Surface Orbitor. Rick Dobbertin created it out of an old milk tanker trailer in 1993 in hopes of circumnavigating the globe (it floats and drives).

Very old car has been modified extremely at the back end with some sort of fake jet engine. I wonder why there is a head and chicken. hurm.. 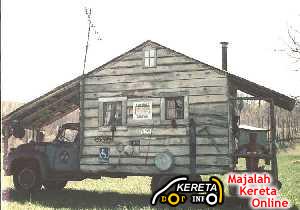 This car might be the first caravan in the world! Haha. Complete small house combined with a truck.