Perodua Eco Challenge 2010 had been held last month on Saturday, 26 June 2010 in Malacca.In that competition USM and UNITEN teams pocket a cash prize of RM20,000 each.USM won a further RM3,000 for the being the third best in the Engineering & Design category while UNITEN also secured a double victory with second place in the Engineering & Design category, picking up an RM5,000 cash prize for their troubles. Universiti Teknology Mara (UiTM) picked up RM10,000 for securing the top prize in this category.

For the 2010 competition, all the 12 team were given a Perodua Viva to be modified or improved for greater fuel efficiency. The competition is base on the innovation and creative mind to modified the car for green environment.For today we will give you some information from one of the 12 team which is the UTM. The UTM Perodua Eco Challenge 2010 team consists of 20 team members, they are 2 lecturers, 2 technicians and 16 students.They named their car as E7K – means Eco RM7K.Why E7K? It is because they spend less than RM7,000 to modify their car.For the E7K, 90% works and ideas come from students and the modifications 100% did by them. 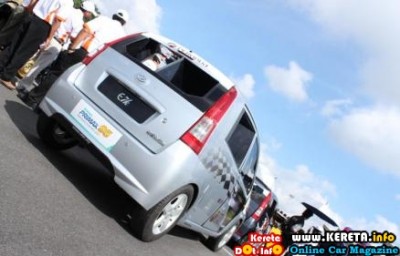 Below are some information about what they had done on their car.

For the low intake camshaft, their camshaft lobes machined to be less to ensure that the intake valve open slowly and close faster.It will cause less amount of fuel enter the combustion chamber. 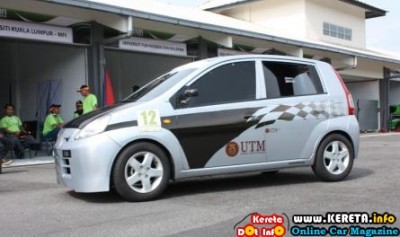 They remove all the things inside their car and the windshield and also glass has been changed with perspex.

Some improvements at the front bumper and also rear window.They made an air deam to minimize underflow and smoother the airflow around front tip.All of these modifications inspired by the 2009 Perodua R&D car. 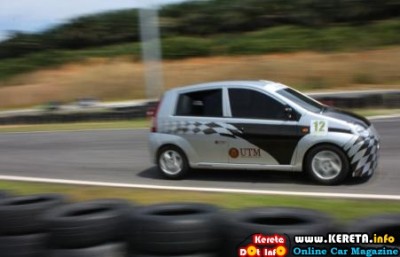 They already did test by using the Viva sparet tyre and the result is more kilometre.Theoritically it is true that spare tyre gives better fuel efficiency because smaller contact patch, but it does not apply at the Melaka International Motorsports Circuit (MIMC) due to lots of tight corners.Tight corner will cause them difficult to maintain the speed.so, they try to use Myvi tyres from the 2009 events.Although the Myvi tyres are more heavy and more rolling resistance, the result is much more better.It gives better handling and their driver no need to apply more throttle after corner exit.The driver also gives good feedback with the Myvi tyre.So, the Myvi tyre is the best tyre for them to be used at the MIMC and suite with their driver’s driving style and speeed.Each team used different strategies.Tyre selection also one of the race strategy.That is why they used Myvi tyres.

Three days before the competition there was heavy rain.One day before the race day the track was flood.So the Myvi tyre will give better aquaplaning during rain.The race marshall also said that the race will go on no matter whether it is rain or not. But their prediction was wrong – no rain on the race day.According to rule, they cannot changed their tyre on the race day.So, they used the Myvi tyre.Unfortunately, they are very unlucky due to engine failure during the race day. 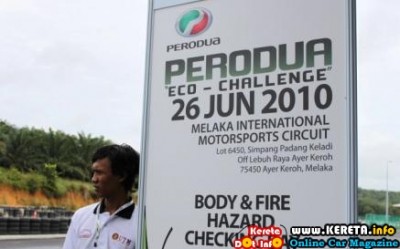