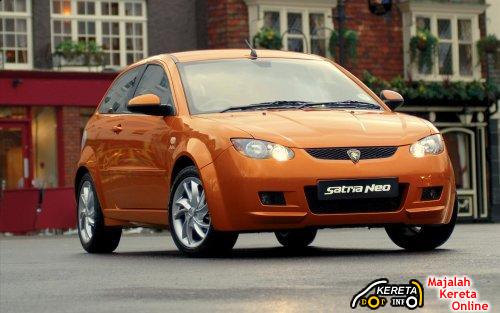 Proton step in organising a competition named “Win a Proton Contest” had increase overall Proton sales about 6%. Hope that this year will be as succesful year for Proton. Read the detail news from Proton Press Release below:-

Proton Edar Sdn Bhd, the marketing arm of PROTON Holdings Berhad today announced the first two winners of the “Win a Proton Contest” which has been held throughout Proton Edar network since February.

The winners are Anisya Rusmaya bt. Ahmad Bashah, 33 from Taiping, Perak and Lew Chern Meng, 32 from Banting, Selangor. They represent the winner for February and and March entries. They each won a unit of Proton Satria Neo 1.6 MT after submitting their entries upon their respective purchases of a new Proton car recently. To enter the competition, Lew had bought a Persona 1.6 AT IAFM and Anisya a Satria Neo 1.6 MT.

“The contest is part of our effort to support government’s call to buy Malaysian products. Proton Edar has received an encouraging response for the contest from customers who have rushed to make their bookings to win the prize. Our sales have increased 6% since the contest started,” said Proton Edar Sdn Bhd Chief Executive Officer, Encik Mohamad Shukor bin Ibrahim.

“We would like to emphasis that it is not too late to enter because the contest will only end on 30th April. We have three more cars to be won for the remaining contest period,” he added.

Proton Edar expected more customers to enter the contest as the deadline for the contest draws near, he added.

The nationwide contest, held since 16 February 2009 and will end on 30 April 2009, is opened to all PROTON customers who purchase a new Proton car during the contest period. To enter, customer will be required to write a creative slogan in the official entry form. As proof of purchase contestant will be required to attach a copy of the car registration card. Proton Edar is giving away a total of five units of the sporty Satria Neo 1.6 MT model during the three month-long contest. Winners are judged by their creativity in writing the slogans.

PROTON, established in 1983, is Malaysia’s largest manufacturer of automobiles. With operations in key market centers from UK and Western Europe to the Middle East, and across South-East Asia and Australasia, PROTON produces cars to suit a range of consumer demands and preferences. The offerings include versatile and reliable four-door family vehicles, two-door hatchbacks for the young-at-heart, luxurious and stylish executive sedans, as well as the world-renowned sports cars from Lotus.

PROTON’s inception as a key driver of national development has seen the brand accelerate its learning curve through technology transfer with strategic partnerships and technical collaborations. PROTON cars are now steadily on track to achieving the mission for the future, gearing up to achieve the promise of a marque which builds cars with passion and soul; cars which are a delight to drive and a pleasure to own.