THE ONE AND ONLY VIDEO: RACE BETWEEN A PRESTIGE CAR AND A FIGHTER PLANE

Amazing challenge as Richard Hammond of Top Gear races a RAF Euro Fighter Typhoon in the Bugatti Veyron. Who will win the horizontal vs. vertical two mile race? The Stig should drive of course; but Hammond volunteered himself.

THE ONE AND ONLY VIDEO: RACE BETWEEN A PRESTIGE CAR AND A FIGHTER PLANE

Before we watch the fantastic race let’s take a review between a Bugatti Veyron and the Typhoon fighter.

An overview on Bugatti Veyron:

The Bugatti Veyron is, by every measure, the world’s fastest production road car. It’s the quickest to 60, it has the highest top speed, and it can absolutely dominate a track.

With a claimed 1001 horsepower, the Veyron is a major technical achievement. Its engine has 16 cylinders, essentially formed by joining two V8 engines at the crank.

This W16 power plant displaces 8.0 liters and features ten radiators for everything from the engine cooling systems to the air conditioner.

The $1.4 million Veyron will reach a top speed of 253 mph – a speed it can maintain for 12 minutes before all the fuel is gone. Power is transmitted to the pavement via four-wheel-drive and a seven-speed dual-clutch automated manual transmission.

A special key is required to “unlock” the Veyron’s top speed of 250+ mph. The car is then lowered to just 3.5 inches from the ground. A hydraulic spoiler extends at speed, and it can also serve as an air brake.

The Veyron weighs a hulking 4,160 lbs, but even its harshest critics admit its handling is surprisingly sharp. Gordon Murray, designer of the McLaren F1 was very skeptical of the Veyron during its development, but after driving the finished car, he conceded it is a “huge achievement.”

Top Gear’s Jeremy Clarkson also publicly stated the Veyron was ridiculous and would never be built, only to call it “best car ever made” after he drove it. He famously characterized it as “utterly, stunningly, mind blowingly, jaw droppingly brilliant.”

An overview on Euro Fighter Typhoon Typhoon will provide the RAF with a multi-role combat aircraft, capable of being deployed in the full spectrum of air operations, from air policing, to peace support, through to high intensity conflict. Britain, Germany, Italy and Spain formally agreed to start development of the aircraft in 1988 with contracts for a first batch of 148 aircrafts. This highly capable and extremely agile aircraft is powered by twin turbofans to Mach 2 at 65,000ft. The airframe is largely constructed of carbon fiber composites and light alloys to save weight while the aircraft is equipped with the advanced ECR90 radar, which can track multiple targets at long range. The pilot can carry out many functions by voice command while aircraft maneuvers; weapon and defensive aid deployment is done through a combined stick and throttle. All of these innovations dramatically simplify operation of the aircraft in combat. Combined with an advanced cockpit that is fully compatible with night-vision goggles, the pilot is superbly equipped for air combat. 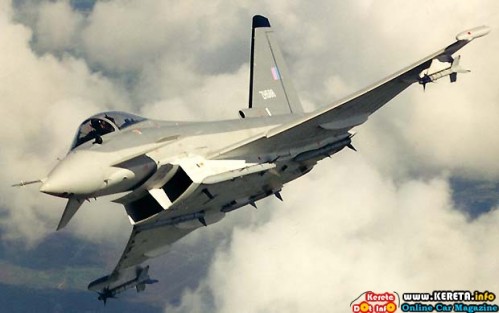 So, lets the show begin, the only race between a car and a fighter jet. Hang on to the edge of your seat though!