Last week we already posted a topic about a research on the Evo X engine which is the 4B11.For today we will post the the Part 2 which is the continuation for the Part 1 last week.You can view the Part 1 again by click the link below.

The 4B11 is equipped with a semi closed deck design with cast sleeves which promotes longevity while cooling the engine significantly. The water jacket is designed not to be affected by the bore structure, especially when installing the head bolts. 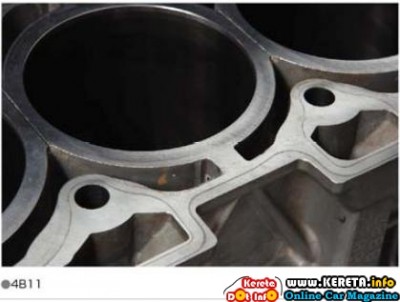 A NEWLY DESIGNED ENGINE WITH NO BALANCE SHAFTS.

The 4B11 is fitted with many devices that eliminates friction of the assembly. The ventilation opening on the upper portion of the main journal is one of these. This was adopted straight from race engine designs which is known to fight pump loss. The blow-by gas is efficiently released, lowering friction as a result.

The oil pan is in 2 separated pieces, and the upper aluminum oil pan is combined with a baffle plate. 6 oil passes on the each of the intake and exhaust sides on the cylinder head lead to exclusive oil return passages which the oil drops down inside the oil pan. The amount of oil accumulated on the inner crank case and crank shaft is decreased, which benefits lowering the blow-by gases and improving oil pressure. On the 4G63, the level gauge tends to blow out when this engine is modified. The 4B11 already comes with a counter device that prevents the increased pressure of the blow-by gas from doing this type of damage. However this raises an issue of the area where the oil jets from the piston cooling nozzle have the possibility of dropping straight below, or the wide clearance area between the crank weights and the baffle.

The upper portion of the oil pan features ribs to keep the structure rigid. The oil pump is positioned at the lower end of the engine assembly, right below the upper oil pan to keep the suction of the pump at a minimal resistance. This setup is ideal during cornering and hard acceleration/deceleration, however if the pan comes in contact with the ground, the immediate oil pressure issues may come about. This gear type oil pump further minimizes friction than the conventional trochoid pumps seen on SR20s. 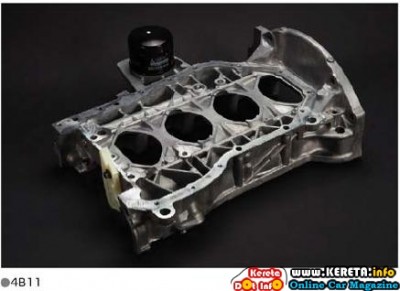 Forged Mahle pistons equipped with 86mm bore and 23mm pin diameter are equipped in the 4B11. These pistons come with cooling channels which with different number of passages to the oil rings according to the intake and exhaust sides. The new piston pins were switched to a skirt type, full floating unit, replacing the ordinary forced pin oiler on the 4G63. Further inspection of the piston top reveals a rather shallow design suited for a forced induction engine with an almost flat shape. Comparing it to an SR20DET which is also a square 86 x 86 and 8.5 compression configuration, the 4B has a slightly increased compression of 9.0. The top and secondary ring lands come thick in design, and along with the relatively high compression, this engine was made to withstand high horsepower. The piston pin and the rings weigh in at 546.2 grams.

It cannot be denied that once the 4G63 were heavily modified, the stock connecting rods cannot be used with full confidence. On the contrary, the 4B11 rods have beefier qualities with plenty of ‘meat’ on the unit, with great shoulder design. These rods also show indications of strength in design because of the lack of oil jet and bearing lubrication holes. Details of the connecting rods include M8 1.0 pitch type rod bolts, and the 4G63’s dowel pin structure being replaced with a knock pin type. This part was designed with the bolt placement as center as possible. With the larger sized crank pins, the bearing thickness was changed from 21 to 17mm to contribute to less friction. The 4B11 rods are 20 grams lighter at 572.5g versus the 4G63 rods weighing in at 592.0g each. The slope ratio of the piston and connecting rod measures in at 3.34, an advantageous criteria if the engine is going to be considered a 2.4 liter long stroke setup in the future. However, the torque to yield type connecting rod bolts which lack sufficient diameter may be an issue, once engine is modified to pump out more power.

The fully countered crankshaft has a 52mm main and crank pin areas, which is skinnier than the 4G63’s main pin but with thicker crank pins. This enables an overall strengthened crankshaft layout. The crank pick up sensor was moved to the rear area of the crankshaft as well. It seems as the flywheel position has been attempted to be relocated to the center of the entire assembly in order to create a more compact engine in terms of longblock height. The oil line that feeds lubrication to the crankshaft journals are not the traditional “H” or “X” pattern, but a one of a kind design from Mitsubishi, presumably to supply plenty of oil to the bearings during high RPM. The
concept of excessive oil supply related to extreme centrifugal force has been well balanced in this area. The crankshaft weighs in at 16.6kg.

TURBOCHARGER MATCHED FOR 2.0 LITERS ON THE BRINK OF COMPLETION.

The EVO 9 was fitted with a TD05H166C-10.5T turbocharger, whereas the 4B11 comes equipped with a TD05H152G6-12T turbine. The new turbo has gone back to the traditional spinning rotation from EVO 9’s reversed scroll setup. Although the 4B11 turbo handles more volume, its characteristics can be described as building boost from the low RPM region with the lower trim impellor size. The impellor itself is made from aluminum, with a titanium aluminum turbine wheel, good for 360 horsepower. The turbo charger relative to the 2.0 liter setup feels like a modified setup that is on its last tuning stages. As an option, an inconel turbine wheel is available for higher loads.

The reversed intake layout puts the exhaust side towards the rear of the vehicle. The manifold is designed for the traditional twin scroll type and is made from stainless steel, weighing in at 6.45kg. The same unit from the final version of the 4G63 weighs in at 6.8kg. The front pipe never extends across the oil pan, minimizing oil temperature problems.

The outlet pipe is constructed in a bigger capacity to yield the combination of the exhaust gas coming from the turbo and the bypass gas coming from the swing valve. The 57mm outlet weighing in at 3.3kg seems as though it is a high quality aftermarket product. 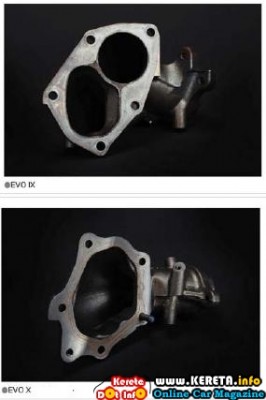 The 60mm throttle body diameter remains unchanged, however the capacity of the surgetank was increased along with a design that emphasized in consistent and efficient air distribution to each cylinder. However, its unfortunate that since the intake manifold faces the front of the car, the collector portion was designed to be positioned lower, like the SR20s seen in S13s. The electric throttle system should raise problems for the aftermarket tuning industry as well.

High resistance Bosch injectors with 540cc/min(3.0kg/?) were found in this engine. The exterior looks identical to that from the VQ, but with an extended nozzle. These injectors do not protrude inside the ports, for a decreased intake air resistance. A wide angle of injection can be set.

The overall synopsis of the disassembly of the 4B11 revealed that this is a completely different engine from the 4G63. We found lots of dimensions to be similar to the SR20 engine. Originally, the vertically laid out 4G63 is an old design, which was improved gradually until its final model equipped in the EVO IX. The final 4G63 pushed out 280hp/6500rpm and 41.5kg-m/3000rpm of torque. The 4B11 was designed with this final model in mind, and on top of that more performance / efficiency features were added along with a low emissions characteristic. The 4B11 pushes 280PS/6500rpm as well, and an increased torque output of 43.0kg-m/3500rpm which still complies to the recent Japanese emissions standards. The overall length of the vehicle was tightened down with the side horizontally mounted engine setup, with such emphasis on a design that battles friction. Although the power output regulations were abolished (Japan), the vehicle was kept at 280ps, but with added increased performance aspects over the Evo IX. With the all above said, the overall engine is generally a engine that follows the trends of the modern conventional engines we see today. What can be stated at this moment, is that the fact that the engine is an aluminum block does not make it any less of an good engine. Many fear that since this is an aluminum engine, it is prone to such problems as engine knock during tuning, burnt pistons, boring of the cylinders (ignoring the sleeve thickness), and resleeving.As a conclusion, the 4B11 is definitely an engine that can be modified for increased performance.