Today, we will share with all of you the result of our research on the Evo X engine.The 4B11 DOHC 16V turbo MIVEC engine from the Mitsubishi Evo X is the latest talk of the town as engineers and performance tuners have lined up to get their hands on the new powerplant in hopes of unlocking the hidden mysteries that have shrouded the Mitsubishi powerplant.So for today we will show the extensive details on the 4B11 T/C upper cylinder head.For your information, the 4B11 that found in the milder version Mitsubishi Lancer is rated at 152 hp and 146 lb-ft of torque, while the 4B11 T/C inline-four turbo found within the Lancer Evolution and ’08 Lancer Ralliart sold in North America delivers a factory rating of 295 hp and 300 lb-ft of torque. Both engines sport the same 2.0-liter displacement but were designed and built by Mitsubishi engineers to handle two completely different power levels. The 4B11 T/C was designed by Mitsubishi with a lower compression ratio (9:1) to handle boost and consists of numerous reinforcements to withstand a higher generated horsepower. The most significant change from the 4G63 engine to the new 4B11T was the change in material used in the block design. The 4B11 block, the first engine in the Lancer Evolution series that uses a die-cast aluminum cylinder block, is comprised of a lighter aluminum construction, which is considered a huge change compared to the previous cast-iron 4G63. Mitsubishi managed to save 27 pounds using the lighter aluminum from its previous cast-iron setup.

Below are the results of the research.

The first step of this research is extremely important, for it involves familiarizing and discovering the basic characteristics of Mitsubishi’s new engine design. Another aspect of this research includes a side by side comparison with its predecessor, the 4G63. This comparison will provide further insight on how this engine is going to be modified and its capabilities.

The first thing that was noticed about the 4B11 was that the block was made from die cast aluminum, a huge change compared to the cast iron 4G63. The 4G63 was setup to be a long stroke engine, however the 4B11 measured in 86mm for both bore and stroke. Some other major changes included the rocker arm type valve train being replaced with a direct acting unit and the timing belt being replaced with a silent chain setup. The MIVEC feature, which was only available on the intake side on the latest version of the 4G63, was not available on both intake and exhaust on the 4B11. Basically, a wide powerband and emissions friendly setup are the two main characteristics that this engine holds. The silent shafts (balance shafts) were also discontinued in the new setup but the engine still maintained minimal vibration. The intake and exhaust layout were reversed, with the exhaust manifold being closer to the firewall. Other changes include an electric throttle body setup, and the usage of smaller spark plugs because of the larger valve size.

The cylinder design was well calculated with balance in mind, whereas the piston top geometrically matches sound with the combustion chamber design. By looking at the design, it does not resemble the conventional forced induction profile, but looks to be designed to that of a low emissions engine. The intake and exhaust ports have large diameter ports for improved efficiency. The low emissions producing design was also made with the MIVEC feature in mind.

Several devices equipped on this engine indicate that the engineers at Mitsubishi have particularly emphasized on the oil system design. On the exhaust side #1 cam journal, has been equipped with bearings because it is the furthest from the oil line. This was adopted to increase reliability and decrease friction in this area. Thicker oil lines via cylinder head had also been installed to supply the increased oil amount because of the MIVEC system. 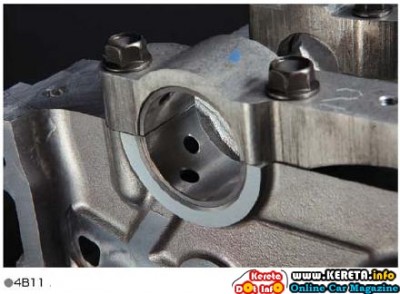 35mm intake and 29mm exhaust valves had been measured. 5.5mm stems measure in that these new valves are definitely larger than that from the 4G63. With these increased factors, the spark plug size was decreased to optimize valve seat and spark plug hole clearance. Compared to an SR unit with the same bore, the intake bigger by 1mm, and the exhaust is smaller by 1mm.

EXHAUST VALVE DESIGNED WITH THE ENVIRONMENT IN MIND.

The exhaust camshaft was found to have less lift and angle. The objective was to design a system that produced cleaner exhaust gases and good power output with the help of MIVEC. The sodium filled valves had been replaced with standard surface treated units, which were considered for environmental reasons. The exhaust valves may be prone to heat damage since the seat rings and valve guides were not manufactured with copper materials.

CAMSHAFTS WITH NO ROCKER ARMS.

The rocker arm setup was tossed aside for a direct acting configuration. This new setup means that there are less components needed for operation, allows a compact design, less mechanical trouble, and less friction, which the camshaft lobes benefit the most. The camshaft specs measured in at 254 degrees intake with 9.4mm lift and 224 degrees exhaust with 8.2mm lift. 35mm diameter valve lifters were combined with shims that allow valve clearance adjustment were also discovered. Considering future plans for this area, the lift can be raised to a sufficient height and the valve springs and lifter nose should clear, if the base circle was kept standard.

The lifters, retainers, and valves were noticeably designed with lightweight in mind. The valves have plenty of room from bottoming out but the spring rates are rated fairly low. Therefore in terms of tuning aspects, these might need to be replaced depending on the camshaft profile and lift. 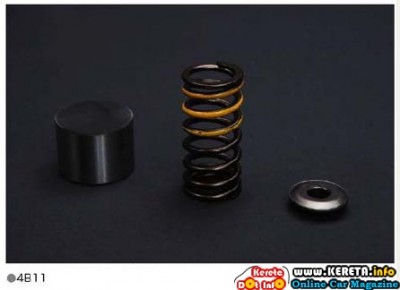 The 4B11 was engineered with clean emissions which is friendly towards the environment, while pushing out a significant amount of power. The MIVEC feature (intake and exhaust variable valve timing system) is mainly responsible for this great balance of two opposite features. Eventhough the Evo 9 4G63 was equipped with the variable valve timing on the intake side only, the 4B11 proves to have a great improvements on the low to mid range torque. The MIVEC is controlled with an ordinary vein that partitions 2 different chambers managed with 2 different pressures. 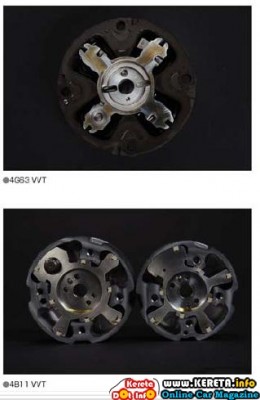 The 4B11 is powered by a silent chain instead of the traditional timing belt. Chains are beneficial over belts because of friction loss and longevivity. The front cover is a single unit, not split into upper and lower, so service and modifications such as head / block resurfacing, head gasket change, compression changes can be more troublesome.

The basic-structured head gasket which is 0.9mm thick, and it is a 5 layer laminated metal type. Since these are not super grommet types, it may not be very trustworthy after modifying other areas of the engine.

The 1mm length head bolts will be tightened by the torque to yield method used on elastic stretch type bolts).Since the engine has an aluminum block, the bolts are longer with increased torque specs. The washers on the bolts are fixed except for #1, for the ease of service and maintenance.

The newly engineered aluminum die cast block features a half skirt design which was incorporated to keep the decrease the overall length of the engine. The bore pitch measured in at 96mm. (SR engine measures at 97mm).The crank caps are equipped with 4 bolts and the 2 structure ribbed oilpan were designed to provide rigidity and strength to the aluminum block. The deck areas are reinforced at the necessary areas and provide plenty of strength and support. The rear section of the 4th cylinder did nit receive strengthening which raises concern if the unit will be affected by the transmission. The emphasis on stress dispersion can be seen on the internals of the block. A smooth design (no rough edges) at the blow-by tunnels / oil pan entrance & exits and the connecting portion between the crank journal to the inside of the block shows that this engine is not affected by stress applied.

For each journal, 4 bolts clamp down each of the crank caps to increase the block strength and rigidity. This design is widely seen in V- style engines and not much so in inline or straight style engines. 4 bolts provide more strength than the conventional 2 bolt style.