Recently i have something in my mind about the Proton New Saga BLM and the Proton Persona. So i decided to do some research on user’s reviews about both cars through the internet and finally today, I went to EON to see and feel it myself about the IAFM engine cars. It took us about an hour to test drive both car at EON Glenmarie with some interview session with the Proton SA (Sales Agent)

The reason why i test drive both car is because they use same campro IAFM engine but differ in capacity and the price range is not too far where you can have a Persona by just adding another more RM100/month. Some people might think that by just adding RM100, they will get a bigger car and surely better for them. To know what i have found out about the different of both of the car, i will explain to you in details here.

Just now i went there with KDI team editors Azameel and Aizat to test drive Saga 1.3L Auto M-Line first and then Persona 1.6L manual B-Line. I decided to have saga auto and persona manual because the price range are close and many people have both cars in their mind to decide which one to buy.

Firstly, when i entered the saga blm 1.3L IAFM campro Auto, I feel so comfortable with the seat and feel that the saga is so spacious. The seat is high and it is adjustable with the height. The steering, is a solid plastic. Perodua kancil’s steering is better with soft synthyetic rubber + plastic material. But that is not so important. You can change the steering wheel anytime with the better one with aftermarket stuff. Same goes to other Proton cars such as persona. Sorry for the statement that i just cancelled here. I just went to Proton Showroom again for some stuff to do and found out the steering is better and softer. Maybe the test drive car use the plastic one. And the interior looks great.

The advantage of this car is the exterior is very nice design with audi like style for front bumper and Mercedes Benz like style for the rear. The interior is better than other cars in its class such as Perodua Myvi especially in terms of leg room, head room and boot space that is huge. You can even put an NGV tank behind and have better boot space than perodua Myvi. The interior is less in terms of design if compare to myvi, but the material is better than myvi where the myvi dashboard is easily get scratched.

About the performance of this auto transmission saga blm 1.3L campro IAFM, at the first gear is a bit less pickup but you will get the actual power after the auto transmission change to 2nd gear. With full load of 4 people inside, i can feel the 1.3L auto engine pull us to reach the maximum output of 94HP at 6000 RPM and 120Nm of torque at 4000RPM which is better than Perodua Myvi eventhough the Myvi is equipped with vvt technology. That is the power of Campro IAFM that just have Integrated Air Fuel Module but no Variable valve timing technology. 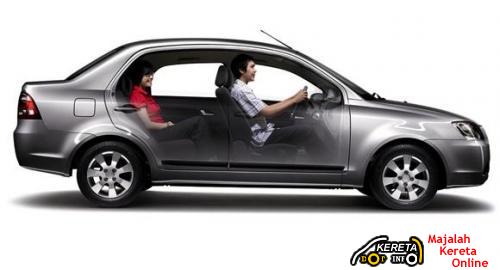 I like to compare Saga BLM to Perodua Myvi (saga vs myvi) because both are a very close competitor in Malaysia Car Market. The different with myvi engine is, it feels so smooth and the saga is quite rough but feel more power even with many people inside. Azameel has drove a Saga Manual before this and according to him, the engine of manual version of the new saga is more noisy than that auto transmission Saga Blm. And it is true, when i push the paddle hard, i just didn’t realized the car has gone to 135km/hour. It is so stable. Not like myvi at 135km/hour you can feel not secure to drive more than that. It is maybe because of the saga’s heavier power steering and lotus tuned chassis that is more stable. I can’t go more because the test drive path not allowed me to do so. When taking a turn at the round about, the body roll of new saga is less and it is so stable at cornering compare to Perodua Myvi. I feel that the suspension system is quite good but Persona wins in terms of comfortability of the suspension system.

And then we test drive the Proton Persona 1.6L Campro IAFM. The interior is just like saga BLM material but better in design of the dashboard. About the interior dimension, even in the specification paper written that Persona have more width if compare to saga, but we felt that saga interior space is better in terms of legroom, headroom and more comfortable. This may be due to the seat of saga is higher and comfortable that allow more legroom and relax feeling sitting in the car while persona has lower seat height. Azameel and Aizat sat at the back during the test drive and made a conclusion that they feel more comfortable and spacious on back seat of saga if compare to Persona and i just shocked about it. No joke and it is totally true.

About the performance of the campro 1.6L IAFM under the hood of Persona, overall is it is impressive. The engine is so responsive and can pull you to the max performance of 148Nm of torque at 4000RPM and 110 horsepower at 6000RPM with the manual transmission. I always push the paddle to the maximum until the pointer of the RPM meter reached red line and shift to higher gear then. It is fun doing that with campro IAFM 1.6L engine. I just have the chance to reach fifth gear once only. During turning at the same round about, it is more stable than saga BLM because of the weight and width of persona. The suspension is of course better than saga and myvi. Feel so smooth especially on an uneven surface of road.

I nearly have an accident with a Toyota Hilux at 130km/hr speed just because that i cannot see the back clearly and didn’t realized the Toyota Hilux at the right lane. This is due to its high position of rear bonnet that obstruct my sight on the centre mirror. But this is just a small issue. You will get used to it. The maximum speed i can go on the test drive path is 145km/hr with very good noise insulation or NVH. You can still feel comfortable and not feel that it is already 145km/hr.

The gear shifting sometimes obstructed by the center armrest. Overall the persona is very good in terms of performance, stability and driver’s comfort.

Which one to choose? Saga BLM M-line auto (RM40k) and Persona B-Line Manual (RM45K)? It may be more practical to have Saga BLM than Persona in terms of Driver and passenger’s comfort, Fuel consumption and adequate space for a family. But if you eager more on performance and more grand look exteriorly, go for Persona then.

Anyway, that is just my humble opinion about Saga BLM and Persona Campro IAFM. It is all depends on you which one to choose after you have test drive both car at your nearest Proton Showroom.

During the test drive session, we saw some Saga BLM Taxi version with higher engine spec 1.6 Litre Campro IAFM with NGV. It must be better to get the Saga 1.6L with NGV i think.
So, to Saga Owner and Persona owner, care to share your driving experience here so that we can help more of our friends to buy Proton car.