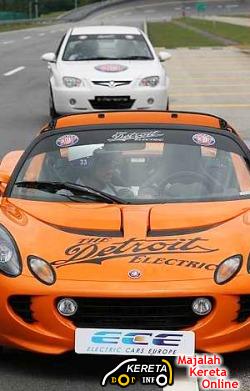 The Netherlands-based Detroit Electric Ltd is in talks with Proton Holdings Bhd and two other carmakers to launch electric cars in Malaysia by end-2009.It expects to sell 30,000 electric-powered vehicles in the first year of rollout, followed by 120,000 and 270,000 units in the second and third year respectively.

It’s a conservative figure. People are really looking for something efficient and want to play a bigger role to counter global warming.

The brand was re-established last year with the electric automotive technology currently being developed by a group of Dutch technologists and the company majority owned by Lam, the former head of Lotus Engineering, and his partner, Electric Car Europe of Netherlands.

The cars, which will carry the Detroit Electric brand, will be built using its existing platform.

“Talks are still preliminary, but we believe our goal to roll out affordable electric vehicles by end-2009 is achievable. We intend to do this based on a contract manufacturing model,” Detroit Electric chief executive officer and chairman Albert Lam said in Shah Alam, Selangor.

“We typically talk to car manufacturers, license their technology and create the electric car, and then contract it back to the manufacturer,” he told reporters after a demonstration of electric cars’ capability.

The electric version of the Proton Persona, Lotus Elise and a Daihatsu Cuore were featured.The Persona model, if it adopted the electric engine, would cost about RM80,000 on the road, Lam said. Currently the Persona costs about RM60,000.

He added that the company may invest up to US$30 million (RM103 million) to set up a research and development (R&D) centre and a battery manufacturing facility in Malaysia.

It has invested US$5 million (RM17 million) in studies and development initiatives at its R&D facility in the Netherlands over the past two-and-a-half years.

The cost per kilometre for Detroit Electric’s cars is 3 sen while gasoline vehicles cost 35 sen per kilometre.

As demand increased, the supporting infrastructure would also improve. Malaysia is likely to have sufficient number of charging stations in two to three years after the introduction of the electric cars.

“The chances of us setting up a R&D centre and a battery manufacturing hub in Malaysia are quite high. The government is very supportive and serious in turning the country into a green technology hub for the region.”

Lam expects the R&D centre and manufacturing facility to be set up as early as the second quarter of next year. “Our pure electric cars are environmentally friendly with zero per cent emission, and the performance is on par with gasoline cars.”

The Malaysian government has asked Proton to test and validate the technology so that it may manufacture its own electric cars.

“The Malaysian government is taking proactive measures to provide efficient and reliable alternative transportation to the people. Detroit Electric is working closely with all parties concerned and we hope to provide a sustainable solution,” Lam said.