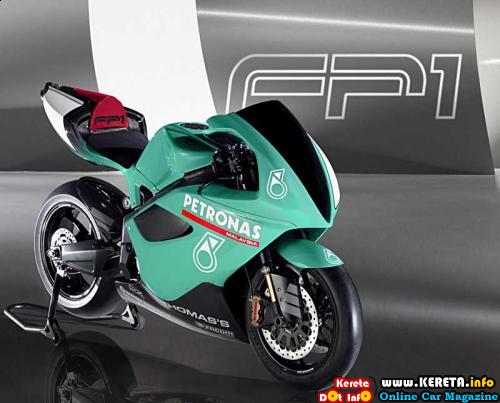 Do you still remember about Petronas FP1? In 2003, FP1 developed jointly by the Petronas and Sauber Petronas Engineering AG as the Petronas GP1 989cc prototype to compete in MotoGP.
The FP1 was developed under the previous regulations (that limited the engine displacement for 3 cylinder to 900cc), as a result the motorcycle was at a disadvantage from the rest of the field.

Petronas had decided to race the motorcycle in the Superbike World Championship. To meet the requirements for the motorcycle’s entry into the championship, the engine was reduced to 899.5 cc (54.9 cu in) and Petronas had to produce 150 road version motorcycles for FIM homologation, thus making it the first Malaysian-built Superbike.

The first 75 units of Petronas FP1s were built in the United Kingdom by January 30 2003.The final 75 units were assembled in Malaysia by the Modenas by July 2003.

Out of the 150 units produced only 100 were made available to the public.While The other 50 units were kept to be used for racing.Petronas terminated the superbike project at the end of 2006.

So..Where the owner of 100 units which were made available to public?