Renault’s keenness on ‘leccy cars and modern design has once again been proven with the introduction of the slinky DeZir concept. The DeZir has been designed to show off Renault’s commitment to ’emotional’ styling and to showcase what future Renaults will look like.

The project was led by design boss Laurens van den Acker and begins a series of concepts marking out Renault Design’s vision for the future. In typical automotive designer style the DeZir’s design language has taken inspiration from Renault’s new signature: ‘Drive the Change’.

Apparently the DeZir’s design “builds on the bonds that are gradually forged between the brand and its customers at watershed moments of their lives, such as when they fall in love, begin to explore the world, start a family, begin work, take time out to play and gain wisdom.”

No, it’s not a children’s fable, the littlest Land Rover is actually a new model, the Evoque.

Faced with tightening emissions regulations, Land Rover went small, designing a new model that would get adequate power from a small engine. The result is the very modern-looking Evoque, a departure for Land Rover from its usual safari-capable tanks.

But despite the Evoque’s size, it is no lightweight. Land Rover fitted it with every technology that currently makes its bigger models capable of tackling any terrain. Not only does the Evoque feature all-wheel-drive, but it has systems for descent control and rock crawling. The ride height was kept high for acceptable departure, approach, and breakover angles. It even has a magnetic suspension technology, which adjusts the rigidity of the ride depending on driving conditions. 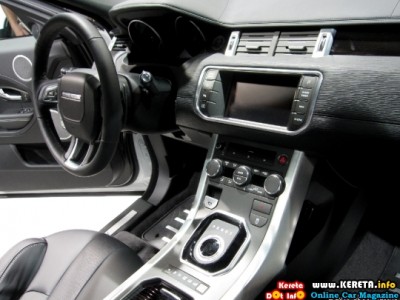 Cabin tech includes a new audio partner, Meridian, which designed a 17-speaker 825-watt sound system for the car, maintaining an emphasis on luxury.