NAZA Kia Sdn Bhd already launched the Naza Citra II Rondo, the cross-over utility vehicle (CUV) adapted from the new Kia Carens to help it capture 20 per cent share of the multi-purpose-vehicle (MPV) market. Fuel-economy average of 33.6 mpg meaning it can go up to 11.9 km/litre of fuel consumption. Rondo’s cargo capacity and passenger carrying versatility are its high points. Pricing is another strong suit compared to other vehicles in the midsize car class. Power was underwhelming in the 4-cylinder version, however, and the lack of all-wheel-drive makes it difficult to compare Rondo with other SUVs. Top Speed of Naza kia rondo is 181 km/hour.

Naza Kia’s seven-seaters are popular choices for Malaysian customers. Naza Kia has actually positioned the two-litre Rondo between the Citra and the bigger Naza Ria MPV, and to be a serious contender in the cross-over segment.

Two variants are offered, both with the 2.0 litre DOHC CVVT engine found in the Kia Optima, the Naza Kia Rondo /Citra 2 2.0 EX price is RM84,888, while the high-line version Rondo 2.0 EXS costs RM88,888. The Rondo is built on the Optima platform. Long list of standard equipment, including dual-front airbags, anti-lock brake system and electronic brake distribution, stylish side mirrors and a Shiftronic gearbox.

Compared with the Citra, the Rondo has some changes at the front and rear ends. Customers can order their Rondo with a choice of four colours: fine silver, black cherry, urban grey and volcanic red. This model start its production from year 2006 in other country and now it is already in Malaysia as a new model of Naza Citra. 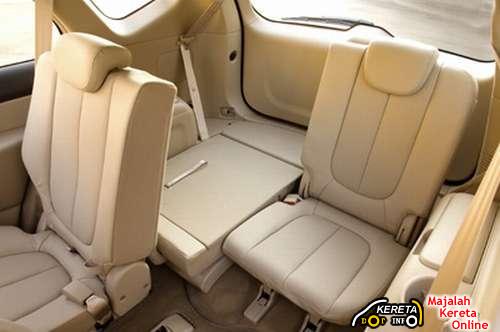