BMW Malaysia has launched the updated 3 Series, and the facelifted model type now packs more muscle and even gets a new gadget in the interior, but more on that as you read on. One lean mean looking machine

Strengthening its position as the sportiest and most efficient sedan, the new 3 Series will be available in five variants – 320i, 320i Sports, 323i, 325i Sports, and the top-of-the-line 335i. All the models, with the exception of the 335i, are CKD units.

All engines are mated with 6-speed automatic transmission and no manual tranny will be offered.

Exterior-wise, changes to the new 3 Series includes a hood designed to kill, aesthetically, that is. The hood is one of the most obvious visual changes on the 3 – there are four lines running along it, accentuating the boldness of the vehicle. Not forgetting the infamous kidney grilles between the headlights; they are now stretched horizontally, and it quite resembles the ones on the 5 Series.

Complementing the new fascia of the car is a newly designed bumper with integrated foglights. The foglights, however, are of a different shape for both the 320i and the 320i Sport. Speaking of lights, LEDs (Light Emitting Diodes) are used generously for both in the front and rear indicators. As for the rear lamp clusters, they retain that familiar L-shape, but are essentially wider now. 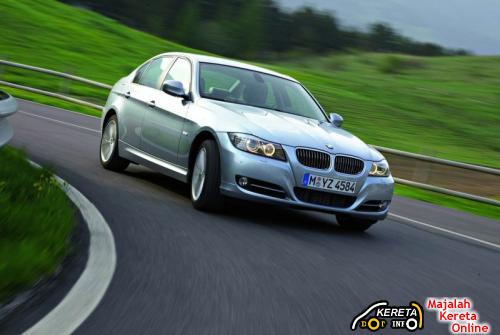 Inside, you get among other things, four colour options for the leather trim and a new generation of the BMW iDrive with satnav, though this is offered only in the 323i and the 325i Sports. First seen in the 5 Series, this controls all the main functions of the car and it has a built-in 80GB hard disk drive to store songs. Included is a super-sized 8.8-inch LCD panel display offering crisp, clear images.

As always, the 3 Series bundles an array of safety gadgetry, namely ABS, traction assistance, wheel-selective electronic brake force distribution, driving stability system (DSC), emergency brake detection and crash-active headrests. The front seats in the new 3 are now equipped with crash-active headrests and this is available as standard on all variants. This feature effectively reduces the risk of injury to the cervical spine in the event of a collision.
Sporting a chiseled butt with LEDs to boot

The 335i gets an additional feature of adaptive headlights with bi-xenon bulbs, guaranteeing full illumination while initiating corners.

From its launch in 2003 till Oct this year, the first generation of the E90 sold a total of 7,762 units, and the updated 3 Series should carry on that success, and to a greater degree.