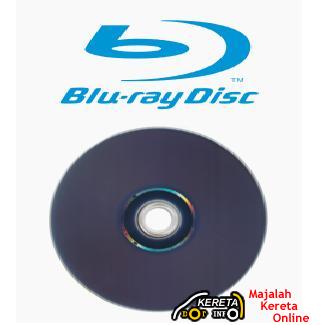 Blu-ray Disc (also known as Blu-ray or BD) is an optical disc storage medium. Its main uses are high-definition video and data storage. The disc has the same physical dimensions as standard DVDs and CDs.
The name Blu-ray Disc is derived from the blue laser (violet-colored) used to read and write this type of disc. Because of the wavelength (405 nanometres), substantially more data can be stored on a Blu-ray Disc than on the DVD format, which uses a red (650 nm) laser. A two-layer Blu-ray Disc can store 50 gigabytes, almost six times the capacity of a two-layer DVD, or ten and a half times that of a single-layer DVD.
Now Mitsubishi has created an automotive Blu-ray disc player that’s sure to catch more than a few drivers’ eyes.The device is about one-third the size of a normal Blu-ray player, and can fit into a single-DIN slot.

Read the detail news from Motorauthority below :

We’ve all seen cars cruising down the highway at night with a movie on in rear-facing display – some are even tempted to follow along and watch. Now Mitsubishi has created an automotive Blu-ray disc player that’s sure to catch more than a few drivers’ eyes.

Mitsubishi Electric – part of the same conglomerate as Mitsubishi Motors, but not the same company – says the device is about one-third the size of a normal Blu-ray player, and can fit into a single-DIN slot. That opens up a huge array of possibilities for larger-screen rear-seat theater setups, even up to full HD quality.

It could also open the door for super-detailed navigation maps systems that can easily be updated with a new disc. Blu-ray discs can hold up to 25GB in single-layer form and 50GB in dual-layer – several times size of the typical hard-disk-loaded map set, and about 5-10 times the size of a typical DVD.

Plans are already underway to put the new Blu-ray player into an in-car HD system by March of 2010, though so far the device hasn’t made it out of Japan.