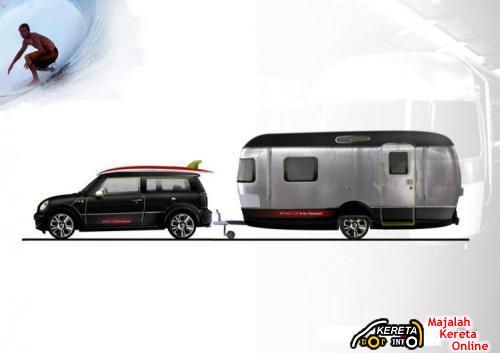 Airstream Inc. and MINI have teamed up to offer the best in both design and functionality with a one-off MINI Cooper S Clubman and Airstream creation designed by Republic of Fritz Hansen. The concept will be presented for the first time at the INTERNI DESIGN ENERGIES exhibition in the courtyards of Università degli Studi di Milano during the upcoming world-renowned Salone del Mobile show in Milan. The exhibition will be open each day from Tuesday 21 to Thursday 30 April from 10:00 a.m. until midnight.

The Airstream will get a cabin designed particularly for surfers and beach-goers, featuring a sunbathing bed and waterproof interior. The trailer will have, among other features, new interpretations of Arne Jacobsen’s Egg and Swan Chair and a table with four Series Seven chairs, therefore allowing more space for the inhabitants. The interior will feature wood panelling to give it a “surfer look”.

Designing details of the 175HP MINI Cooper S Clubman with a twin-scroll turbocharger will consist of clean lines and bold colors such as lightning green, the companies explained in a statement. Most of the car will be black, with neoprene accents along with green trims. The 22ft trailer will have similar exterior details as the MINI.

Airstream, Inc., of Jackson Center, Ohio is the oldest recreational vehicle
manufacturer in the world. Today’s Airstreams are the perfect blend of retro
exterior style, modern interior luxury and convenience, and rugged all-American
construction. A complete line of Airstream models makes any excursion, from
day trips to the beach to cross-continental treks, a comfortable and exciting
journey.