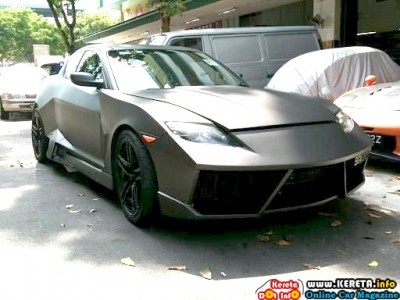 My goal is to create a completely unique RX-8 Coupe with a sleek design that will stand out from the crowd.

The company associated with the project is called J’s Artworks. They initially turned me down when I could not settle with their asking price but the company’s boss liked my idea and so we finally agreed on a fair amount.

Starting with the side skirts, I did not like the usual aftermarkets parts that were readily available. In most cases, side skirts simply make the car look lower without adding to the design of the car.

I really liked the Lamborghini Reventon‘s side skirts so I decided that was the way to go. 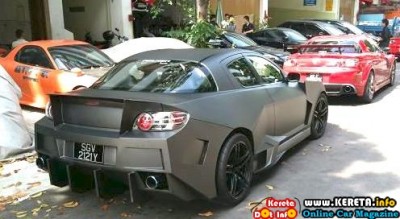 Next up the front bumpers that were a real challenge. For the RX-8, I found the Nakamura Racing Factory front bumpers truly eye-catching. So from there on, took some styling cues from other Lamborghini models and voila!!!

The rear-end of the car was a big question mark. There was no design to my liking. However, after going through all sorts of supercar exotics and hot rods for ideas, I came up with something I liked. The back won’t be finished until September 2010. It is to surprise the public at the upcoming Super Import Nights here in Singapore.

So with the Lamborghini Reventon-style skirts, J’s Artworks suggested that I widen the body. That did not sit very well with me because I still wanted the use the car on the race track.

I wanted the car not only to look good, but also to be reliable. Lots of planning, trials and errors, and setbacks were encountered along the way. First of all, I wanted to make sure that the FRP, putty, etc used was the right amount so that no unnecessary weight would be added.

Second, I didn’t want to make the body too wide so I could still be able to use my own 245/35 R19 tires. However, we did have to use spacers at the back. And that took quite a bit of time to find a suitable pcm so that I could use the thinnest spacer required. We ended up using a pcm from a BMW. Due to the known heat issues with the RX-8, we had to be careful with the bonnet. I really wanted to go with a vented hood, but having the sleek design in mind, I decided to create an inverted vented bonnet. The heat will escape through an opening we created at the back of the hood.

The large vents on the front bumper also help by directing plenty of air to the oil coolers and engine bay.

Color wise, the obvious choice was to go black. But the boss at J’s Artwork told me that with this finish, the sharp lines and contours of the car would not stand out therefore defeating the purpose.

Going glossy was a no no. Matte was the answer. Since I could not get glossy black, and yet wanted it to look cool and stealthy, I chose the F-22 color.

Something grayish and dark but not too much. The Reventon looked similar and I found out that it had a pinch of special green in it. So we ended up using this combo.

IZ: It seems that this Mazda RX-8 owner really wanted to build a rotary powered Reventon.This is actually the combination of  the limited production Reventon and the conceptual Estoque sports saloon. I have never seen a car like this in Malaysia before.