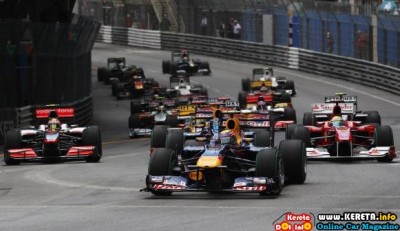 Red Bull’s Mark Webber has clinched his second win within a week after a dominant performance in Monaco on Sunday.Read the full news from ESPN F1 below.

WEBBER DOMINATES FROM START TO FINISH.

Mark Webber completed a start-to-finish victory in the Monaco Grand Prix, his second win in succession, to go joint top in the drivers’ championship with team-mate Sebastian Vettel who finished second.

The pace of the race was dictated by four safety car periods, which slashed several multiple second leads for Webber. The final caution period lasted up until the final corner and resulted in Webber leading his team-mate by just 0.4 seconds over the line. Robert Kubica rounded of a brilliant weekend in the Renault to finish third, after keeping Vettel in his sights throughout the 78 lap race.

Fourth was Felipe Massa with Lewis Hamilton fifth, but the real talking point after the race emerged when Michael Schumacher passed Fernando Alonso for sixth. As the Mercedes SLS pulled into the pits at the end of the final safety car period, Schumacher got better traction out of the penultimate corner and bullied his way up the inside of Alonso into the Anthony Noghes bend. If allowed to stand, the result will be a huge disappointment for Alonso who had fought from the back of the field after starting from the pit lane.

Nico Rosberg had the perfect view of the incident from eighth place but held back from trying to follow his team-mate through. The Force Indias of Adrian Sutil and Tonio Liuzzi took the final two points paying positions in ninth and tenth.

The race revolved around tyre strategy in the early stages, with the safety car periods throwing a curve ball to the teams. The first came on just the second lap when Nico Hulkenberg understeered into the wall at nearly 150 mph in the tunnel. Before the accident he had damage to his front wing and that likely resulted in him losing control. The second caution period was caused by another big shunt involving a Williams, this time the rear suspension of Rubens Barrichello’s car appeared to fail as he went up the hill to Massenet.

The third was caused by a loose drain cover that the marshals quickly inspected and decided was not a threat to the running of the race. The fourth and final period was a result of the most spectacular crash of the weekend. Jarno Trulli misjudged a move on Karun Chandhok at La Rascasse and his Lotus mounted the rear of the HRT after touching wheels. Chandhok instinctively moved his hands up to protect his head but the car’s roll-hoop did its job and both drivers came away unharmed. The accident happened within seven laps of the end and resulting safety car led to the controversial move by Schumacher on Alonso.

All the accidents meant only 12 cars crossed the line for the chequered flag behind Mark Webber. Among the other retirees was Jenson Button, whose McLaren’s engine cooked itself just a lap after Hulkenberg’s accident.