LIVE FROM GENEVA : THE AUDI A8 HYBRID 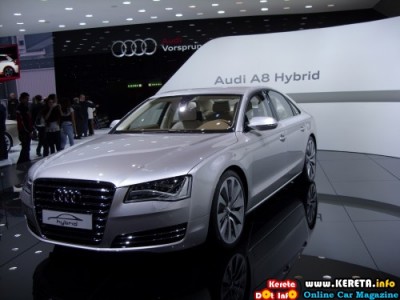 In the 2010 Geneva Motor Show, Audi had revealed the Audi A8 hybrid which they called as the “the efficeiency standard”.The Audi A8 hybrid will remain as a concept so Audi hasn’t released a price, but when you’re talking about getting the moon, it’s safe to figure it’ll cost you a few stars.

For your information, the Audi A8 hybrid is designed as a parallel hybrid – a highly efficient principle which avoids unnecessary friction and power losses. A powerful electric motor is situated between the four –  cylinder petrol engine, which has an output of 155 kW (211bhp), and the eight-speed tiptronic.It contributes 33 kW (45 bhp) of power and an ample 211 Nm of torque. The combined system power is 180 kW and 480 Nm. This accelerates the Audi A8 hybrid from 0 to 100km/h in 7.6 seconds with a top speed of 235 km/h.

The Audi A8 hybrid, which weighs 1,885 kilograms, drives as if it had a big six-cylinder gasoline engine or a TDI under its hood. From zero to 100 km/h the vehicle accelerates in 7.6 seconds, and it can continue to accelerate up to 235 km/h. Yet its fuel consumption according to the EU cycle is only 6.2 liters per 100 km.In city traffic, the hybrid drive uses about 20 percent less fuel than a conventional drive. Both the car’s performance and its fuel economy benefit substantially from a major advantage of the A8 model series – its lightweight aluminum body based on the Audi Space Frame principle (ASF).

The hybrid drive is designed for fully electric-powered driving up to 65 km/h and for a distance exceeding two kilometers – especially well-suited for driving in the city or residential suburbs. When conditions permit, the driver can also select the electric mode by actuating a separate e-key in the cockpit.

The energy store of the Audi A8 hybrid, a state-of-the-art lithium-ion battery, is located at the rear of the vehicle.It is much more powerful than other models, while taking up less space and contributing less weight.Its nominal energy is 1.3 kilowatt hours and it is also working within the ideal temperature range.The technical design provides a glimpse of a future standard-production model – the Audi QS hybrid, which will be brought out out in 2010.