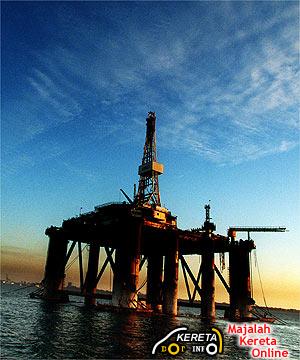 In London, November Brent crude fell 63 cents to settle at $102.45 a barrel on the ICE Futures exchange.

Crude prices have risen about $15 in the past week as investors funnel money back into commodities on worries that a proposed $700 billion bailout of financial firms will undercut the dollar and boost inflation.

But analysts said signs of weak U.S. demand for fuel have taken some of the momentum out of the rally.

The economic slowdown has forced American consumers and businesses to cut back on energy use, sending oil prices falling from a record $147.27 a barrel reached July 11. Demand for gasoline over the four weeks ended Sept. 19 was 3.5 percent lower than a year earlier, averaging 9 million barrels a day, the U.S. Energy Department’s Energy Information Administration said in its weekly inventory report.

“Some people want to own real assets as an inflation hedge but others see crude as a consumable good, and any economic weakness is going to be bearish factor even if this bailout gets approved.”

Still, some analysts say crude could be heading higher amid falling global supplies. About 66 percent of oil production and 61 percent of natural gas output in the Gulf of Mexico remains shut-in after the passage of Hurricanes Gustav and Ike, according to the U.S. Minerals Management Service.

The Gulf area is home to a quarter of U.S. oil production and 40 percent of refining capacity.

OPEC’s decision earlier this month to cut production by 520,000 barrels a day and militant threats to Nigerian oil supplies have added to the supply shortage.

“The market is starting to come to grips with how bad the supply situation is going to be,” said Phil Flynn, analyst at Alaron Trading Corp. in Chicago.

“We really can’t afford to lose any more barrels.”

Federal Reserve Chairman Ben Bernanke and Treasury Secretary Henry Paulson were on Capitol Hill Wednesday for a second day of testimony about the bailout plan.