VOLVO will come out with new SUV this year which is called the new volvo xc60, the brother of the other XC class in volvo production that indicates a SUV vehicles. This futuristic new design SUV will surely compete the latest BMW X6. We gather some information on the upcoming Volvo XC60 for you to view the info on this Volvo SUV.

After a leak of its photographs over the internet, the 2009 Volvo XC 60 is all set to make its debut at the Geneva Auto Show. Touted as the baby brother of Volvo XC 90, the XC 60 will display a unique design which will be different from what the Volvos have displayed before. The XC 60 is targeted at the urban buyers and a very modest sales target is set per year. The stylish and sophisticated design of the Volvo gives a glimpse of the future of the Swedish brand. 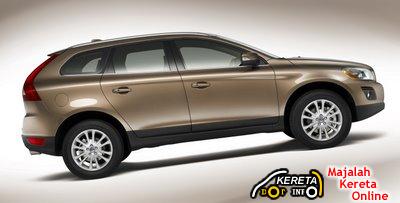 The SUV has a stylish and sleek finish even though it looks pretty sturdy. The grille goes down deeper and the vehicle tries to portray a coupe with the taillights connecting the roof and the flank in a bold plunge. The new Volvo crossover will face stiff competition from Acura MDX, Infiniti EX, BMW X6, Mercedes-Benz GLK, etc. The biggest markets are predicted to be China and Russia, besides Germany, U.S., and U.K. The design of the Volvo XC 60 has been modified keeping in mind the American and Asian preferences.

The SUV will be equipped with two five-cylinder turbo-diesel engines producing 163 horsepower and 185 horsepower respectively. There are plans to add a 163-hp, 2.4-liter diesel front wheel drive version in the year 2009. The Volvo XC 60 derives the technology from a global platform, which in turn has helped it to become a unique vehicle. A notable feature of this SUV would be the “city safety” in which the SUV can automatically use the brakes at low speeds in order to avoid any sort of collision in the front.
The all-wheel drive Volvo will be offered in the States exclusively with a turbocharged 3.0-liter T6 petrol engine that produces 285 HP. Europeans will also be able to choose from two variants of the 2.4-liter D5 turbodiesel, producing 185 and 163 HP respectively. In 2009, Volvo will add a front-wheel drive version in the XC60’s Euro line-up powered by the 163 HP 2.4 D5 engine.

Highlights of the XC60 include a variety of intelligent safety systems like the City Safety that helps the driver avoid or reduce the effects of low-speed impacts by braking the car automatically if sensors detect a potential impact and the driver does not react. Sales of the XC60 are set to start in Europe this fall, while sales in North America will begin in early 2009
The Volvo XC60 is a compact crossover SUV produced by Volvo. It was revealed in production form at the 2008 Geneva Motor Show. It went on sale in Europe in late 2008, and is scheduled to go on sale in North America in 2009 for the 2010 model year.

Volvo will produce the XC60 with both gasoline- and diesel-burning engines. In North America, only the gasoline-engine will be available. The XC60 shares technology with the Land Rover Freelander of 2007, using a modified version of the Volvo P24- platform. The Land Rover LR3 will set the stage for these corporate siblings to enter the market, as much of the engineering and tuning of this CUV was done by Volvo in Sweden, only offroad capabilities were done at Land Rover in England. The project director for the XC60 is Lars Blenwall.