Configuration of the fuel cell stack is such that it is located between the two rear seats that flank driver’s position, while a battery pack sits low in the middle of the car. Electric motor is just ahead of the rear axle and the two fuel storage tanks just above it. The layout guarantees optimal weight distribution, a good passenger cabin (for a sports car) and an interior that focuses a lot on the center-placed driver.

“The Honda FC Sport explores how to satisfy automotive performance enthusiasts in a world beyond petroleum,” said Dan Bonawitz, vice president of American Honda Motor Co. “People who love sports cars will still have a reason to love in a hydrogen-powered future.”

The Honda FC Sport Design Study is hydrogen-powered three seat sports car. It uses the V-Flow fuel cell stack and electric drivetrain from the recently introduced FCX Clarity. The fuel-cell stack is located between the rear seats and the electric motor is mounted just forward of the rear axle. Inside the driver sits in the middle of the car, while the two rear passengers sit directly behind the driver on the left and right side of the vehicle. The doors also open upward from the rear.

While the drivetrain is mounted low in the vehicle, the vehicle’s hydrogen tanks are visible through the rear deck glass as a way to showcase the car’s fuel-cell pedigree.

The driver sits in a racecar-like center position with the passengers flanking the driver to the rear. The car’s sleek body sweeps rearward and tapers into a geometric hex form, which houses the fuel cell’s coolers. At the front, Formula 1-style barge boards enhance high speed stability and provide a visual link to Honda’s Grand Prix efforts. 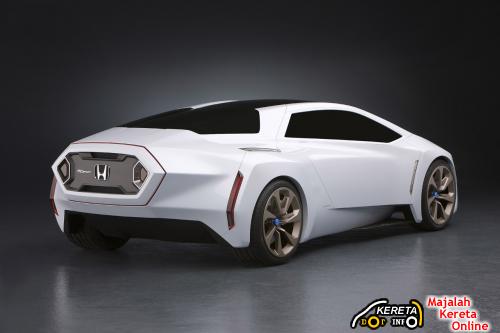