Honda is doing a straight 180 on the next S2000, judging by the concept car revealed at the BIMS today. The Honda S2000, a dynamic marvel with that screaming 2.0-litre engine and excellent short-throw 6-speed gearbox, has been due for a new model for some time now, as rivals keep bettering their offerings. The concept uses Honda’s hybrid technology, although our feeling is this would not be the engine of choice when the street car debuts.

Featuring integrated rear lights, a flowing bodyline and a shape clearly related to the Civic hatch, the S2000 concept seems to have been shortened and its stance widened. There seems to be a lot of flow in the lines, giving the car cleaner, more seamless looks. Interior again, is a Civic relative of some note, peppered with blue background lighting, digital speed readout and utility buttons. And the concept is no longer a roadster; we see space for two baby hobbits at the back. No sign of where the roof goes though, and none of whether said roof is made of canvass or tin either. 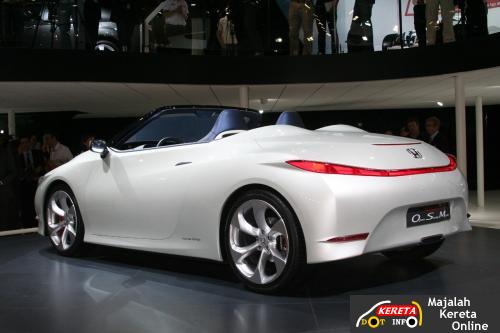 Honda says that the OSM roadster on display at the 2008 British Motor Show is merely a design study, but given that “design study” is frequently a euphemism for “future design language,” we wonder if we’re seeing the next iteration of Honda car styling. Frankly, we hope so, because this is worlds better than what we’ve seen from the automaker of late, from the Accord right on up to the bland and bloated Pilot. The OSM, short for Open Study Model, is a shapely two-seat convertible that we’d be happy to drive today. Well, maybe with headlamps that weren’t lightsaber-sized. Other than that, we love the jaunty look, especially in back, where the taillamps sweep gently from one side of the car to the other. Since it’s a styling exercise, there’s no specific powertrain combination associated with it, but Honda assures us that the car is an indication that lightweight, low-emissions motoring needn’t be boring.

No kidding, guys. Inside, the cockpit basically evolves the two-tier instrument panel you’ll find in the current Civic into a far more attractive driving environment that we hope to see in road cars sooner than later. While Honda says there’s no plan to create a production sport/econo roadster like this anytime soon, somebody’s obviously thinking about it. Future S2000 replacement, maybe? “Design studies” such as this don’t happen by accident.