At The 2008 Paris Motor Show Citroën has unveiled the GT Concept, an extreme show car developed in partnership with Polyphony, maker of the Gran Turismo 5 PS3 videogame. The car features a racing-inspired design, dynamic sculpted lines and sharp graphics.

The Citroën GT Concept show-car presented at the 2008 Paris Motor Show, is actually a style replica of a vehicle from the digital world.

The car is the result of a partnership between Citroën and Polyphony Digital Inc. , a subsidiary of Sony Computer Entertainment Inc., and designer of the driving simulation game Gran Turismo 5 on Playstation 3, which has already been shipped in more than 50 million units worldwide.

In the game, GT by CITROËN features an electric drive train powered by a fuel cell with no pollutant emissions.

With chrome chevrons on the smooth, aerodynamic, front end asserting the car’s Citroën identity, the GT by CITROËN is bursting with styling cues typical of the Company’s creative flair. The sharp lines and sculpted body are emphasised by the white-to-grey flared paint work which gives the car a forceful look and an impression of speed – even when it’s standing still.

The sleekly muscled racer sports a large wraparound windscreen adding to the impact of the car’s size and dynamic appearance. Penetrating blue LED headlamps and slim-line carbon fibre rear view mirrors – which appear to be suspended in mid-air – add to GT by CITROËN’s futuristic racing style.

Premium materials used throughout GT by CITROËN’s hi-tech interior reflect the car’s distinguished and refined personality. In contrast to its light body work, the cabin features a darker, more brooding colour scheme with two padded racing seats finished in black leather and fitted with four point harnesses. The dark leather, along with copper and steel touches inside the cabin and a low-slung driving position, create an opulent and powerful racing environment. Important on-board data is displayed via a red LED head-up display, allowing drivers to maintain focus on the track.

In the game, the GT by CITROËN showcases Citroën’s dedication to the environment with an electric drive train powered by a fuel cell, totally eliminating pollutant emissions.

Kazanori Yamauchi, President of Polyphony Digital Inc and creator of Gran Turismo, said “GT by CITROËN shows how the worlds of virtual and real-life motoring can join together to create a truly innovative partnership.

“We were delighted that Citroen approached us and gave us the opportunity to combine our creative strengths to build this very special concept car.

“To see the car take shape in game and then for real has been a truly unique experience as our work normally stays in the digital world. I just hope I can get behind the wheel of GT by CITROËN and drive it on a real race track!”

GT by CITROËN is geared to the world of motor racing, with its dynamic styling, sculpted lines and sharp graphics. The rear end is oversized, made exaggeratedly long in order to create an effect of retinal persistence. 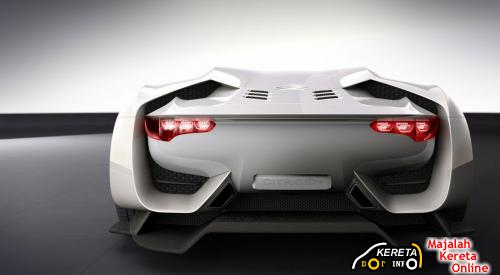